Second in a series

In October, The Current profiled newly hired Haldane fifth-grade teacher Kristen Spooner. A former lawyer, she had previously taught high school in the Bronx. We checked back with Spooner to see how the school year was going after six months on the job.

Spooner, who lives in Cold Spring (she married a Haldane grad) and will next year become a Haldane parent when her son starts kindergarten, says she has been pleased with her fifth-graders. “The pacing is different [than in high school], but the problem-solving skills and critical thinking surprises me in every way.” A math specialist, Spooner also teaches interdisciplinary topics to students in her homeroom class, which she works with for a few hours each afternoon.

Spooner and Haldane’s two other fifth-grade teachers have been working on an initiative focused on the election process, with the goal of forming a student council in the elementary school. Students had to organize voter registration and candidates solicited signatures to get on the ballot. They competed first within their classrooms, then among the grade. The council will create a  school constitution.

The project, which ties into a unit on democracy and also came out of lessons last year on the Universal Declaration of Human Rights, is an example of “project-based learning” embraced by the district, which has partnered with a Florida-based firm to develop engaging curriculum. 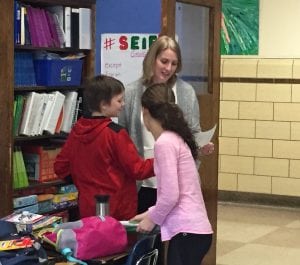 Spooner assists two of her fifth-grade students. (Photo by A. Rooney)

Spooner said the election process in school went much more smoothly than the bitter U.S. presidential battle, which she says did seep into the classroom.

“There has been much negativity, and, in particular, the day after Election Day was difficult, but actually having this democratic experience in our building has helped to take away the external and make the democratic process a positive one,” she says. “Some students carry the weight of the world on their shoulders, and while we touch upon sophisticated topics — we’ve talked about immigration policy, for example — I try to shift some of that to more positive reflection: ‘Were you a good friend yesterday?’ or ‘How did your soccer game go?’ ”

Spooner says she has seen a dramatic change in her fifth-graders in only six months.

“A lot of them are really maturing,” she says. “There’s a big push to make them autonomous and less dependent on me as the teacher. They are learning to teach each other; in fact, now it’s almost automatic. A lot of students resisted at first; they turned to me to answer, but they got used to it and the classroom runs more smoothly. On a typical day I’m more of a facilitator in their learning and they’re driving it along themselves most of the time.”

Technology plays a key role in her classroom, she says, in particular for presentations and formative assessments. Through online surveys, Spooner can track individual, class and grade responses to determine if students are grasping a particular topic. However, most work is still done one-on-one. “I want them talking,” she says. “It’s rarely quiet in here, because they’re thinking out loud.” 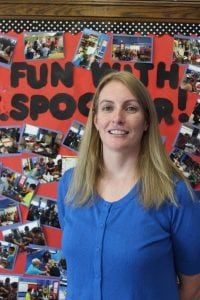 The “emotional stuff” has proven to be more of a challenge than she anticipated, she says. “They are much more outwardly sensitive than high school students,” she says. “I spend a good deal of the time making sure everyone is emotionally well, because they need to be emotionally ready in order to learn. By high-school they can manage their emotions better, put them aside while they’re focused on school.”

The dynamic between the genders is also different than in older grades. “They’re still separate at this age, and I’ve learned to be sensitive to that, in ways like making sure there’s not only one boy or girl within a group I make up to do a project,” she says.

Inevitably, there have been a few activities Spooner initiated that didn’t work out as she planned, such as a spelling bee-like contest focused on multiplication. “There were a lot of hurt feelings,” she says. “I thought it would be an enjoyable way to practice, but the boys were more competitive and the girls were reserved.”

Another project Spooner says she is reevaluating is a pen-pal exchange with students from the Bronx. While the Haldane students might benefit from being exposed to what may be an unfamiliar environment, she wonders if the relative wealth of students in Cold Spring will be difficult for Bronx students to relate to. She says she hasn’t abandoned the idea but feels it needs more consideration.

At the same time, Spooner says it’s encouraging that the district seems to welcome attempts at innovation, even if they sometimes don’t work. That is “rare and pleasant,” she says.

With five months remaining in the school year, Spooner admits she is a little behind schedule. “There’s a lot in the curriculum, but I’ve spent a lot of time working with kids on how to work,” she says. “I sacrificed time in the beginning but ultimately they will gain from it.”

As for living in the same town where she teaches, replete with the inevitable Foodtown encounters with parents, Spooner says it’s all positive. “Halloween was especially great,” she says. “My husband and I chose Haldane because we knew what it was, and Haldane chose me back. The parents and administrators here offer teachers so much support.”

She adds: “I’m having a great time. I like the connection with the kids. They tell me so much about their lives, and they’re always curious about mine, too.”