Also, an update on Breakneck congestion

Even at age 8, when he first began hiking, Don Weise says he found walking through the woods transformational. “It showed me that people change on the trail; they get in the Zen moment and the complications of the world slip away,” explained the self-described “trail geek.”

Weise, director of development and membership for the New York-New Jersey Trail Conference’s (NY-NJTC), spoke Feb. 2 at the Desmond-Fish Library in Garrison on winter hiking, offering tips and safety advice. In addition, senior program coordinator Hank Osborn, who manages the Breakneck Ridge stewards, reviewed the 2016 season and measures NY-NJTC has taken to alleviate congestion and the number of rescues. 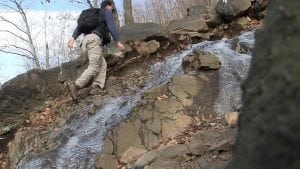 The nonprofit NY-NJTC, a coalition of outdoors clubs which build, protect and advocate for trail lands, coordinates thousands of volunteers who maintain 2,150 miles of trails along both sides of the Hudson from northern New Jersey to the Catskills, and from New York City to the Massachusetts state line on the east. This includes a large portion of the Appalachian Trail and more than 500 miles of trails in and near the Highlands. Its first project, in 1921, was the Tuxedo/Mt. Jones trail, followed by sections of the Appalachian Trail at Bear Mountain in 1923.

Weise, the author of Circuit Hikes in Harriman: 35 Loop Hikes and Trail Runs in Harriman and Bear Mountain State Parks, said he enjoys winter hiking because of its “wide-open views, ice formations and evergreens.” He also noted there were fewer snakes, ticks and bears. 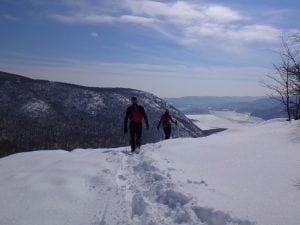 After running through a list of safety tips, Weise shared his favorite destinations in Harriman and Bear Mountain state parks:

Much of Hank Osborn’s work with NY-NJTC is focused on the popular (and many would say overrun) Breakneck Ridge, which had more than 100,000 visitors last year. In 2013, in response to the increasing number of rescues, the Conference added stewards at the trailhead to offer advice, maps and water on weekends during peak hiking months. Too many hikers arrive, Osborn said, “unprepared, with no water, incorrect footwear and no knowledge.” 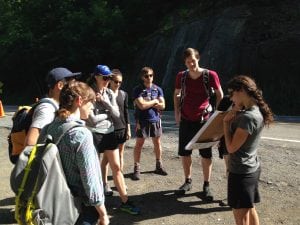 The program was expanded in 2014 and again in 2015, and last year a third steward was added at Breakneck (the Conference employs eight stewards who rotate shifts). The season, which begins on Memorial Day weekend, was extended through the end of November and the hours from 8 a.m. to 6 p.m. because of the many distress calls received after dark despite prominent “Closed at Sunset” signs.

Osborn said part of reason for the increased number of novice hikers is that Metro-North has increased the number of trains that stop at Breakneck. In 2015, Metro-North increased its stops from two a day on Saturday and Sunday to three a day, and last year doubled the stops to six a day, he said.

A “Busy Day” at Breakneck

In addition, trains that once departed Grand Central Station only in the morning now leave as late as 1 p.m., which increases the chances hikers will be stranded after dark. Social media has also contributed to the influx, he said, with hikers sharing photos of the breathtaking views.

The conditions at Breakneck grew so crowded last year that the stewards at times closed the trailhead. More than 700 people were turned away, Osborn said, with many directed to other trails or attractions in Philipstown and Beacon. In 2013, a busy day would bring 500 to 600 hikers, he said; today, it is 1,500 to 1,800. On more than 30 days last year, more than 1,000 hikers came to climb.

None of this will come as a surprise to anyone who has driven along Route 9D when it is clogged with cars and pedestrians near the trail entrance. In 2016, Osborn said, 3,000 maps were distributed, 60 lost hikers rescued and 3,300 hikers directed to Cold Spring or Beacon. 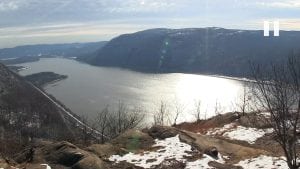 A view from atop Breakneck in late January 2013 (Photo by Jonathan Gracey/ hctrails.com)

Due to their proximity and fitness, the stewards, who are trained in Wilderness First Aid, are often first on the scene of rescues. To improve communication on the trail, the stewards provide hikers with business cards with a cell phone number. Hikers can call if they’re lost or need advice. New York State provides a shed, portable toilets and garbage bins at the site.

To maintain the pristine qualities that make the trails so enticing, the NY-NJTC developed a Conservation Corps. Its Taconic crew consists of four crew leaders who oversee volunteers. The groups set out, over four-day periods, to tackle a specific task. Last year, more than 1,000 people volunteered, said Osborn, and together they put in over 4,600 hours of labor across 94 work trips, completing assignments such as the placement of stepping stones, construction of stone stairs, building crib (retaining) walls and side hills and re-routing a waterfall. For more information, visit nynjtc.org or call 201-512-9348.