City asks school board to reconsider parking lot at Sargent

Seemingly faced with few options, Beacon officials have returned to the city school board to ask for help finding a spot to construct a centralized fire station.

The move comes three months after the school board rejected a proposal to put a new station on the campus of the 377-student Sargent Elementary School, one of only a few locations in Beacon where the fire department says a station could be built, based on response times.

The city had asked the school board to sell 1.75 acres on the Sargent campus for a station. As an alternative, it asked the board to allow the fire department to build a parking lot on a portion of the land to serve a station across Route 9D on a smaller Elks Lodge site. 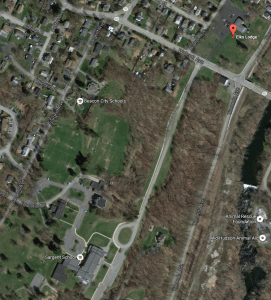 Citing safety concerns, the board elected in November not to move forward with either plan.

But with so much land in Beacon under development for housing, the city has few other options, which prompted Mayor Randy Casale to ask the school board to reconsider the parking lot.

Speaking to the board on Jan. 26, Casale said the city now only views Sargent as a potential parking site. “If you’re open to the idea and you’ve got concerns, let us know what they are so we can try to work them out so we’re not losing two sites,” he said.

A parking lot could be built on the east side of the Sargent entrance road, with its own entrance and exit off Route 9D, the mayor said.

The request did not appear to sway the board. At its Feb. 13 meeting, some board members argued the issue should be put to a public vote, while others who opposed the idea in November remained steadfast against it.

“We already expressed our concerns with the safety of the students,” said board member Georgia Patchen. “I still have concerns with where exactly that parking lot is going to be.”

If put to a vote, the proposal could appear on the ballot in May, when the district holds elections for its board and annual budget.

“Let the voters vote on it and give them the power to say yay or nay,” said board President Anthony White. If it passes, he said, “we could put contingencies on what we would expect going forward.”

When other board members asked how the public could vote without having more details, White responded: “Why would we spend time doing a design if it doesn’t pass a public vote?”

City Administrator Anthony Ruggiero said he plans to bring a revised list of three or four possible sites to the City Council and ask for guidance on which to pursue. That could happen within the next two months, he said.

There is no agreement in place to build at the Elks Lodge site, Ruggiero said. Moving forward there likely depends on school board approval to utilize some land on the Sargent campus for parking.

Numerous studies have concluded that the city’s three aging fire stations should be consolidated into a central facility. Maintaining the existing stations — two of which are more than 100 years old — is difficult operationally, Ruggiero said, although any decision will be made by the City Council.

City officials considered 17 sites before choosing Sargent and the Elks Lodge as the best options. A 2014 study recommended building a 21,200-square-foot station at the city-owned Cannon Practice Field at Verplanck Ave. and Matteawan Road for what was then estimated to be $7.25 million. That site is no longer being considered because a 1920s deed restriction stipulates that the land only be used for children’s athletics.

The school board has discussed no longer hold its meetings on Mondays to avoid conflicts with City Council meetings, which are also held on Mondays.

“It makes it impossible to communicate well with the City Council,” said board member Meredith Heuer, citing the fire station discussion as an example.

However, several school board members said they would have scheduling conflicts if meetings were not held on Mondays.

One thought on “Firefighters Still Looking for Land for Central Station”