Sondheim’s “Company” opens at the Depot

Most people remember a song or album they listened to over and over as a teenager. Depending on your vintage, maybe it was a track by Elvis, or the Stones or Nirvana, or one you won’t admit to.

For Maia Guest, it was the cast album of Stephen Sondheim’s Company. Not only did she play it constantly, she says, she used its lyrics as texts in drama school and saw two stagings. Now, she’s directing her own production and, with musical director Nathan Perry and choreographer Christine Bokhour, guiding 20 singing actors in what many consider the first “modern” musical. It opens at the Philipstown Depot Theatre in Garrison on Feb. 24 and runs on weekends through March 12. 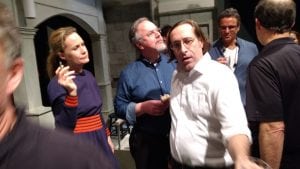 First produced in 1970, the show, a comedy with a dramatic resolution, carries vestiges of the social revolutions of the 1960s. The story centers on Bobby, a single man swimming in a sea of married friends, who questions his emotional connections as he approaches a birthday (his 35th in the original production, here changed to 45th, reflecting the many more people who remain single into their 30s.)

The gestation of Company was unusual: author George Furth’s analyst thought writing plays would be therapeutic. Furth wrote a number of short pieces examining relationships between couples. Not knowing what to do with them, he asked Sondheim, an acquaintance, for advice. Sondheim told him to talk to director and producer Hal Prince, who felt they could be linked in a musical. 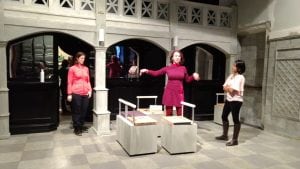 “George came to New York and we talked about how to shape these disparate pieces into a large form,” Sondheim has said. “As we talked we realized that what the plays had in common was a couple and a third person, and it dawned on us that the third person should be the same person.”

Working from Furth’s scenes, Sondheim developed the character-driven songs. “My approach is closest to that of an actor,” he has written. “Often by the time we’re through, I know the script better than the author does, because, like an actor, I examine every line and every word.” 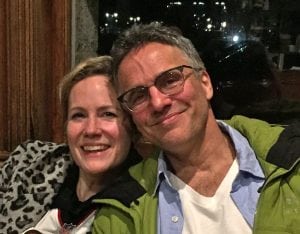 Maia Guest with Chris Whipple (Photo by A. Rooney)

The emphasis on couples is one reason Guest thought Company would resonate in the Highlands. “I know a lot of talented couples in this area,” she says. “It’s hard to stay married! But most of all I love the music and how the music mirrors the action.”

Although it is set in the year it was made and reflects that time in many ways, Guest feels it “holds truths that are still there; I don’t feel it’s dated. I’ve seen every one of these couples in my life. It’s of a time and so much was informed by what was going on, and you need to honor that, but it carries.”

Chris Whipple plays Bobby in what is his third Sondheim show. A speech pathologist who lives in Beacon, Whipple is emblematic of quite a few of Company’s performers, having studied drama and voice in New York City to pursue a career in theater and eventually altering course. “Finding this group of people [at the Depot] has been incredibly fortunate,” says the actor. “It’s a haven of safety and support for people who perform here.”

“Bobby is the string,” says Guest. “It starts and ends with him and he ties all of it together.” 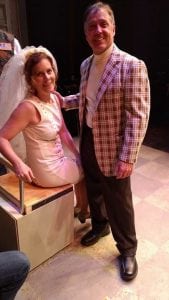 Liz Keifer and Robert Convertino, who are married, are cast with other partners in the production. (Photo by Linda Speziale)

Although it is vocally intimidating, Whipple says he loves singing Sondheim’s music because “the melodies are intricate and there’s a purpose behind that, from the character’s standpoint. It’s a welcome challenge.”

The demands of the role reach beyond the extensive dialogue and songs, however, to what’s underneath. “It’s a scary role for me to take on. You could conceive of the whole play as taking place in Bobby’s mind. The play is set up so that Bobby moves from being a gracious host to becoming bewildered and resistant to connection, but then attaining a vulnerability in which he can allow himself to feel…. This is the closest role to aspects of myself as a person that I’ve played.”

Aiding and abetting the proceedings is a multi-level set, reflecting Bobby in conflict with himself. Replete with a bar and mirror, the idea, Guest says, is that “Bobby is constantly looking at the mirror to find his true self and accept or reject that self. It will also feature projections of iconic New York City views. The city is a main character: why you come, why you stay, why you leave.”

Guest has worked as a director and actress, along with co-adapting the first approved adaptation of James Baldwin’s novel, Giovanni’s Room, at London’s Drill Hall Theatre. Her acting performances include many classical roles, including Hudson Valley Shakespeare Festival’s Twelfth Night and World’s End Theater’s The Seagull and Way of the World.  She is also known for her role as the psychiatrist on several seasons on the Netflix show Granite Flats. Guest calls her cast, with its mix of community and professional actors, “amazing — an incredible pool of talent.”

Company will be performed at 8 p.m. on Fridays and Saturdays with 2 p.m. matinees on Sundays. For tickets, visit brownpapertickets.com or call 845-424-3900

Editor’s note: Alison Rooney is a member of the show’s ensemble.