The city of Beacon must save the Tioronda Bridge; the structure and its site are of far greater value than any new sleek design. Not only is the bridge on the National Register of Historical Places (it’s one of the last bowstring truss bridges left in the country), but more important, it is woven into the fabric of the city’s own history. 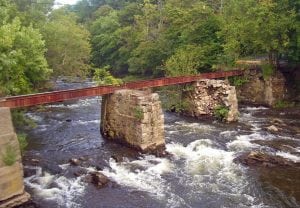 The remains of the Tioronda Bridge (Photo by Daniel Case)

Although critics have cast doubt on the logistics, feasibility and value of sticking to a plan adopted by four administrations (including the current one), it is possible to bring the bridge back to its former glory. Before our own eyes an abandoned paper-box plant became an international tourist stop without changing its structure, and the rebuilding of the Poughkeepsie railroad bridge has brought the Hudson Valley a majestic destination. People do travel far and wide to see these unique treasures.

The city has spent a great deal of money on design plans, engineering fees and staff to move the rebuilding of the bridge plan forward, and now is not the time to stop the restoration process. There must be other strategies to preserve this bridge, including grants, tax credits, national and state highway/bridge development incentives. Its time to take the Tioronda Bridge out of storage, rebuild and share it with the world with pride!

Kraft is vice president of the Beacon Historical Society. The Tioronda Bridge was built between 1869 and 1873 and once extended South Avenue across Fishkill Creek before it was dismantled in 2006.