When bullies strike, nothing like fine pastry puts them in their place. Sharing crumbly cakes may sweeten even the most obnoxious characters, but naming a sweet treat after a villain has given victims the last word — hamantaschen — along with the last bite.

Hamantaschen cookies are the signature tri-cornered baked goods filled with surprises, long savored as part of the Jewish Purim festival. If there’s a cookie with a good story behind it, this pastry owns rights.

“It’s the shape of hamantaschen that separates them from any other pastry,” explained Diane Botnick, a member of Philipstown Reform Synagogue. “They’re symbolic of the three-cornered hat of the [biblical] villain Haman.”

In Hebrew the pocket-style cookies are called oznei Haman or Haman’s ears. Whether named for ears or hats, or early on for pockets of poppy seeds as in the Yiddish montaschen, all sources seem to agree that hamantaschen were designed to remind the Jewish people of their victory over a despot. 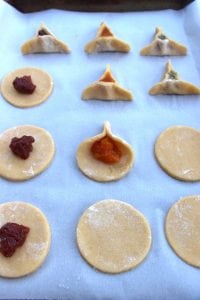 Prepare hamantaschen with your preferred fillings and pinch into triangular shapes. (Photo by M.A. Ebner)

In ancient Persia during the reign of King Ahasuerus, Haman lobbied for all Jews to be killed. Mordechai helped stop the plot with reinforcement from his relative Esther. The king was looking for a wife, so Mordechai orchestrated a beauty pageant of sorts that included Esther.

The king fell in love with Esther. Revealing her Jewish faith, she alerted him to Haman’s plan, and the villain was sent to the gallows. To commemorate the thwarting of Haman’s plot, the Jewish people established Purim to celebrate their salvation.

During Purim, hamantaschen pastries replace the breads typically shared after services. “Hamantaschen is basically made with a shortbread pastry,” Botnick said. “I’ve also had them with a sour cream base but it’s always a simple dough. Prune, poppy seed and apricot are traditional fillings,” but they are also made with other fruits or chocolate. 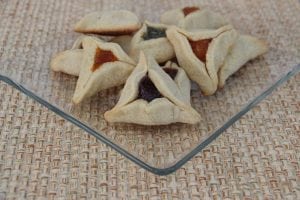 Purim begins the evening of Saturday, March 11 and ends March 12, but you can bake hamantaschen anytime. I often see the treats at my favorite Rockland County bakery, but it took a trip to Austin, Texas to try them. Friends invited my family to a Purim festival at their synagogue where we learned a little about Haman and hamantaschen. The children were given noisemakers called groggers. Each time the villainous Haman’s name was read, the children made as much noise as possible. My sons recall this celebration as a special day with friends to eat hamantaschen together.