For the first time in decades, Main Street in Beacon will have a movie house.

The Beacon theater building at 445 Main St., built in 1934 to show “photo plays,” will reopen, possibly as early as this summer, as a three-screen theater called Story Screen that will show classic and independent films as well as first-run movies.

The theater’s owner, Highview Development, is constructing 30 residential units in the five-story building, said Brendan McAlpine, the president of Highview, which also restored the Roundhouse on the east end of Main.

Story Screen is the moniker for a film series launched in 2015 in Beacon by Mike Burdge, who is partnering with McAlpine, Jason Schuler and Scott Brenner on the theater project. Story Screen has operated as what Schuler, who owns More Good at 383 Main St., calls “nomadic pop-up theater,” with screenings in restaurants and shops. 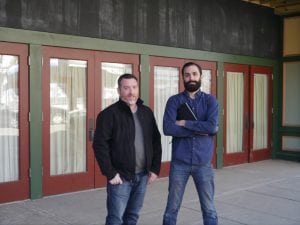 Brendan McAlpine and Jason Schuler outside the Beacon theater (Photo by J. Simms)

The main theater will feature 85 stadium-style seats, McAlpine said, while a second theater will have 25 and a third room — all on the ground floor — will be used for screenings, events and possibly live performances. The theater’s lobby will have a bar as well as traditional concessions “with a twist,” he said.

“You don’t make the movie; you’re just selling someone else’s product,” McAlpine said. “So what we have to focus on is making the guest’s experience as great as we can from the minute they walk into the theater. We’re trying to provide an elevated movie experience.”

McAlpine bought the theater in 2015 from 4th Wall Productions and received Planning Board approval last year for its redevelopment. The plans went through several iterations before the group settled on bringing movies back to Main, he said.

“It was always important to me that there was a public-space feature to it,” he said. “The one thing I thought was missing here was a movie theater. The trend is moving away from cineplexes and you see more of these indie theaters popping up everywhere. I couldn’t think of a better place for something like that.” 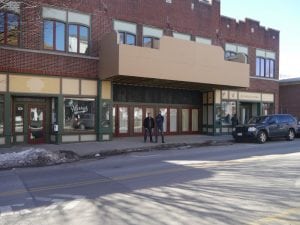 The Beacon Theater, renamed Story Screen, is expected to reopen in 2017. (Photo by J. Simms)

The site originally housed an opera house built in 1886 that was torn down and replaced in 1934 with a 1,200 seat venue, according to the Beacon Historical Society. The city has had other movie houses: the Roosevelt Theater, once at 288 Main St., had 1,000 seats, and Family Cinema was located at Route 52 and Main Street. An establishment called the Apollo Theater is believed to have been in Beacon, as well.

The Beacon theater at 445 Main St. closed in 1968 and was shuttered to the public for more than 40 years until 4th Wall bought the building in 2010 with plans to create an 800-seat performance space. But the group fell behind on its mortgage payments and faced foreclosure before Highview stepped in.

A community group called Save the Beacon Theater was formed after McAlpine bought the building and lobbied Highview Development to restore the theater as a centerpiece for Beacon’s creative community.

McAlpine and Schuler said this week that they believe Story Screen will bring the building full circle. “It draws on the ethereal energy of what the space was intended for,” Schuler said.

9 thoughts on “Beacon Theater to Reopen”