Street artist will bring characters to life at Towne Crier

Most artists can recall the moment when they experienced the transformative and redemptive effect that making art can have. For Ron English, it came at knife point.

He had transferred to a new junior high school in Illinois when three bullies pulled a knife on him. He responded by offering to draw them a picture.

“So I drew a picture of the three kids who had pulled a knife on me,” he said. “They looked at it and said ‘Hey, this is pretty cool.’ From then on, they protected me.”

English, who lives in Beacon, grew up to become one of the world’s most celebrated street artists. His cartoonish creations mash up corporate branding and pop-culture icons with skeletons, mutants and monsters into an instantly recognizable rogues’ gallery. His work has been displayed in galleries and clandestinely installed on billboards and building exteriors all over the world.

Now, on Feb. 26 at the Towne Crier Café in Beacon, his characters will appear somewhere they’ve never been before: on stage. English and his rock band The Rabbbits (yes, with three b’s) will be unveiling selections from a rock opera they’ve written called Rabbbits in Delusionville. The band is raising money via GoFundMe to record the project as a double album. 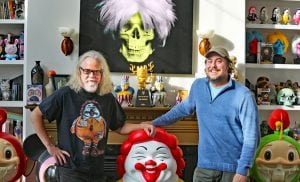 English wrote the music this past summer with two other Beacon residents: producer Joe Johnson, who has worked with everyone from Keith Richards to Daniel Johnston, and singer and photographer Russ Cusick, who owns the Russell Cusick gallery on Main Street.

At first glance, Cusick and English appear to be unlikely collaborators. Cusick creates large-scale, bucolic landscape photos of the Hudson Valley, while English draws bloated and grotesque cereal mascots. But both come from a musical background, and both rented space at Spire Studios in Beacon, which is where they met.

Cusick said he had just watched Exit Through The Gift Shop, the 2010 Oscar-nominated documentary about street art which features English when “the next day someone’s knocking on my studio door and I look up and it’s him.”

Their first collaboration was the Walk Club, which is exactly what it sounds like: “a bunch of us old guys, out for a walk in the morning, for our health,” English explained.

It was during a meeting of the Walk Club that Cusick suggested a collaboration with Johnson. English pitched forming what he called a “franchise band.” Much like McDonald’s operates in different locations with the same menu, English and his collaborators would write songs and franchise them out to regional bands with the same name all over the country who would draw from the same pool of songs.

“That was my big spiel,” said English. “I delivered it to Joe, who said ‘That’s terrible. What else have you got?’ He noticed a notebook of lyrics that I had and asked what they were. I explained that I write these songs that tell the stories of all my characters, the stories of how they try to start a revolution in their world. And Joe said, ‘Well, these are good, let’s do some of these.’ ” 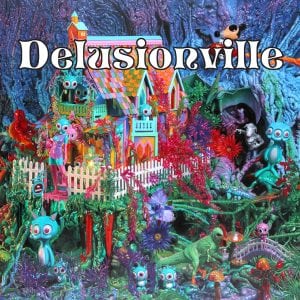 A vision of Delusionville, by Ron English

The men spent the summer writing at breakneck speed. “We went into the studio early in the morning and didn’t take drugs,” he said. “When you do things during the day, you’re a lot more professional. And in that weird period we got six to eight songs that are absolute fucking hits. They’re world-class, hooky-ass songs. The other ones are good, too.”

The trio has enlisted a cast of characters to join them onstage from singer Michelle Shocked to local bands such as The Package and Ate Bit, and the singing sisters Rhiannon and Rowan Parsaca.

English describes the rock opera as “Aesop’s Fables on acid,” in which alien rabbits create a psychedelic underworld that’s soon populated with species of animals that devise systems to exploit each other, from “fact factories” to magical eggs that grant anyone who eats them the power to believe their own lies.

If the story seems especially relevant to the current political situation, that’s not by accident. The songs were written before the election, but English says he knew that Trump would win.

“My special insight came from Facebook putting me in touch with all my old friends from the Midwest,” he said.

Rabbbits in Delusionville grew out of English’s frustration in trying to convince his friends to not vote for Trump. “They’d get hostile,” he said. “They’re entrenched. The more you tell them that this guy is an idiot, the more they feel like you’re calling them idiots, and then they like him more, and then they have to defend him, and there’s nothing you can do. 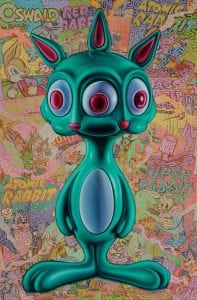 One of the inhabitants of Delusionville, by Ron English

“There’s no way we can talk about political or religious ideas without hating each other,” he continued. “So I thought, what if we had a story about these other beings who had a religion, but it’s not your religion, and they have politics, but it’s not your politics? There’s not a direct correlation, you don’t think that anyone is specifically representing you. Then, hopefully, we can talk about these things.”

Don’t expect a happy ending. As with all of his art, English approached the story’s structure in an unconventional way.

“There’s only like eight different stories in the world,” he said. “So we were wondering, what would a ninth story look like? We decided the ninth story is the one that’s anti-climactic. It’s sort of based on a lot of the old fables, but the old fables don’t play out like this.”

The performance, which begins at 7:30 p.m., will be preceded at 6:30 p.m. by an exhibit of English’s Delusionville artwork. Tickets for the concert are $15 at townecrier.com or at the door.