Face Hamilton at noon on March 4

The Haldane girls’ varsity basketball team, seeded No. 1 among Class C teams in Section 1, defeated No. 4 Pawling, 64-37, at the Westchester County Center in White Plains on Feb. 28 to advance to the sectional final against Hamilton (16-5) at noon on Saturday, March 4. Hamilton advanced by defeating North Salem, 56-19. 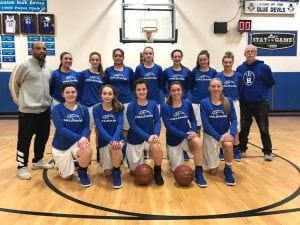 Because it received a first-round bye, Haldane (16-5) had not played since Feb. 8. Allison Chiera led the Blue Devils with 22 points against Pawling. Senior guard Missy Lisikatos left the game after only a few minutes with what appeared to be a knee injury.