Oliver Ackermann has been to Beacon before, but never to play with his band. That will change on Tuesday, March 7, when Ackermann and A Place to Bury Strangers play Quinn’s on Main Street.

“I’m super psyched,” he says. “It’s such a good community, lots of good people there. It’s going to be a lot of fun.”

Ackermann’s enthusiasm and low-key attitude may suggest a laid-back affair. If you’ve heard the Brooklyn band before, you know even its ballads are loud.

When the band released its self-titled debut album 10 years ago, it was hailed for bringing the early 1990s “shoegaze” sounds of such bands as My Bloody Valentine and Ride into the 21st Century. It relied on a staggering amount of effects and equipment to create an oceanic wave of sound, hence shoegaze, since band members had to spend most of their gigs staring at their feet in order to make sure they were stepping on the right pedals. 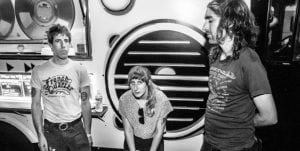 But whereas early shoegaze bands aimed to create an all-enveloping ecstatic bliss that verged on the mystical, A Place To Bury Strangers aims straight for the hips. It’s music that you can actually dance to, or at least start a fight to.

Both the band and a company that Ackermann founded called Death by Audio that builds effect pedals grew out of a fascination with messing around to create sounds he liked. “Suddenly other people liked them too,” he says, “so I started to build pedals for other people.” His clients include U2 and TV on the Radio.

The drive to create new sounds is what brings Ackermann back to the studio and the soldering iron. “Sometimes I’m trying to recreate a unique sound I heard, like when I hear someone throwing an amp down a hallway, or someone lighting a guitar on fire,” Ackermann explains. “You hear that, and you think ‘I want that sound.’ Only there isn’t anything out there that reliably makes that sound, so you’ve got to build it yourself.” 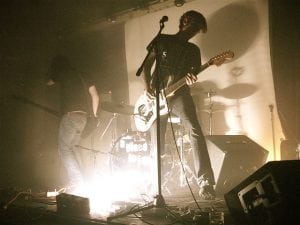 A Place to Bury Strangers (Photo by Louise Fenton)

He admits that he’ll sometimes build an effect or create a sound and love it so much he saves it for his own band. However, the sounds he loves the most, he says, tend to be a hard sell. “It’s just too fucked up and crazy that I don’t think I could get customers to understand it,” he says. “But that’s the stuff I like, so I know that at least I can use it.”

The band is working on an album for a fall release and will use the Quinn’s gig to debut new songs. Notably, many of the band’s early influences, including The Jesus and Mary Chain, Ride and Slowdive, have recently released music for the first time in almost 20 years. (Slowdive signed to Dead Oceans, the same independent label that will release the new album by A Place To Bury Strangers.)

“It’s completely surreal, growing up and being really into those bands and then suddenly they’re relevant again,” says Ackermann. “But I guess we live in weird times right now so you’ve gotta embrace them.”