I had the good fortune to see the Stephen Sondheim play Company at the Philipstown Depot Theatre in Garrison on Feb. 25 (It’s Hard to Stay Married!, Feb. 17).

Directed by Maia Guest, it was my first Sondheim musical, and it was a wonderful presentation. We quickly forgot about the thunderstorm raging outside until the second act was about to begin. The lights in the theater and the surrounding neighborhood went out. The audience waited patiently for a half hour or more while the Depot’s generator kicked on for a minute or two and then off. 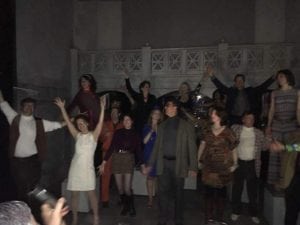 After the lights went out during a performance of Company at the Philipstown Depot Theatre on Feb. 25, audience members used the flashlights on their phones to light the stage. (Photo provided)

The house manager offered a complimentary ticket to another performance to anyone who wasn’t happy with the situation. No one took her up on it. The decision was made to continue the performance in the dark, without music.

“Sondheim without music is never going to work,” I heard one seasoned theater-goer exclaim. But the cast came out for the opening number and, lit by a few flashlights and cell phones, did an incredible job.

I am thankful and amazed at the shared experience. The second act turned out to be as magical as the first. I was appreciative being part of such an accepting audience, as well as being able to enjoy the talents of each of the actors who created a memorable production.