The interaction leads to the Mentor Show, which gives the students an opportunity to exhibit their work in a gallery. This year’s show runs through Sunday, March 12. The art center also is hosting the School Invitational Themed Exhibition in which local students, including those from Haldane, Garrison and Beacon, submit a body of work based on a theme. This year it was a take on pop art.

In the mentor program, John Farrell, a senior at Haldane, was guided by Steven Petruccio, a painter and illustrator who lives in Fishkill and teaches at Marist College. Farrell had no previous formal training but says he wants to pursue art more seriously. Petruccio said he was happy to become a mentor. “When I have the opportunity to teach students prior to college, I grab it,” he says. “I had no exposure to studying art, growing up.” 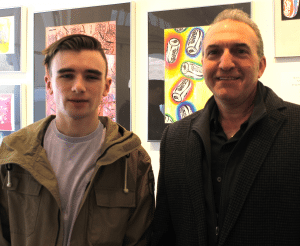 John Farrell and Steven Petruccio at the Mentor Show opening (Photo by A. Rooney)

Petruccio said that while he creates traditional and digital art, Farrell works by hand, unlike most young people he has met. “I gave him a sketchbook, and told him to ‘draw what you see,’ ” he says. Those sketches can then be “the roots for what you will do digitally.”

“I’ve been throwing a lot at him,” the mentor says. “Once we started painting, he did a studio visit and started working here. I was able to show him how to mix, blend colors, and two-hour sessions often turned into four or five. At Marist I’m usually teaching 14 or so students, and while I get to each one, working individually with John I can watch every brush stroke.”

Farrell and Petruccio, who is the former board president at the Barrett Art Center in Poughkeepsie, talk frequently about art colleges and professional illustration. Farrell says he would like to study art and “create my own profession” as a freelancer. “I want to travel the world and spread my art everywhere, rather than keep it confined to a gallery,” he says. 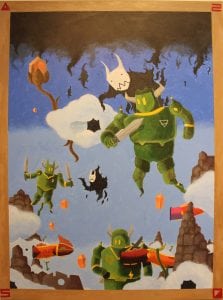 Petruccio continues to encourage his student. “I’ve told him not to wait for anybody to tell him that he’s ready,” he says. “I spent my early years worried that my portfolio wasn’t good enough, and that’s the wrong approach.”

At a reception held March 4 to open the Mentor Show, many artists stood near their work. Anneke Chan and Cassi Laifer, both freshmen at Haldane High School, created self-portraits under the guidance of painter Carinda Swann, who recently retired as director of the Garrison Art Center.

Chan described her work as “a self-portrait of me in traditional Han Dynasty clothing. My family is Chinese and believed to be descended from the Han people.” She said Swann taught her about color, planning, composition and shadows — “having it not look ‘dead,’ giving it dimensions.” 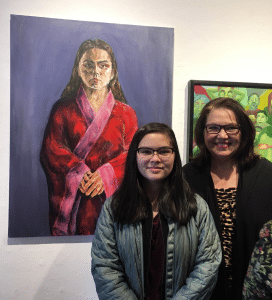 Anneke Chan of Haldane and her mentor, Carinda Swann, with Chan’s self-portrait of herself in traditional Han dress (Photo courtesy of Raquel Vidal)

Another student artist who did a self-portrait, Grace Padgett of Wappingers, wrote that she had hoped to “gain a better understanding of the human form, anatomy and improving my own observational skills” from her mentor, Danielle Lafayette, who she says gave her “the confidence that I needed.” However, she admitted that drawing her own face was challenging. “Even now it still doesn’t resemble me entirely,” she wrote. “However I guess that’s OK because the reason I applied for this program was not to make a perfect painting” but to improve.

The mentor exhibit can be viewed Saturday and Sunday from 10 a.m. to 5 p.m. at the art center, which is located at 23 Garrison’s Landing.