Many questions for state rep at town hall

Sandy Galef, who represents Philipstown in the New York State Assembly, asked for — and received — an earful on March 4 as constituents at a “town hall” at the Desmond-Fish Library in Garrison weighed in on issues ranging from the Affordable Care Act to election policy, “death with dignity” and nuclear energy.

A Democrat and former teacher who lives in Ossining, Galef has been in the assembly for nearly 25 years and was easily reelected in November to her 13th term.

Two days before the Republican majority in the U.S. House of Representatives unveiled legislation to repeal the Affordable Care Act (commonly referred to as “Obamacare”), Galef expressed uncertainty about what comes next.

The ACA has provided funds to states to expand Medicaid and access to medical treatment to the previously uninsured; the House bill would cut or limit Medicaid allocations to states and otherwise severely alter or abolish the program. 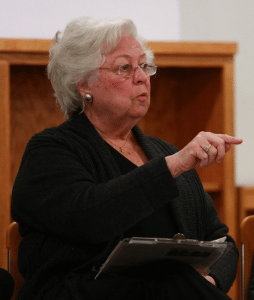 Sandy Galef at the forum (photo by Ross Corsair)

President Donald Trump endorsed the legislation, but some Republicans blasted it for retaining too much of Obamacare. Democrats objected for the opposite reason, and the views of the Senate, which could draft different legislation, remain unclear.

According to Gov. Andrew Cuomo, an estimated 2.7 million New Yorkers would lose health coverage in an ACA repeal. Cuomo’s draft budget for the 2017-18 fiscal year, under review by the State Legislature, presumes $52 billion in federal aid, two-thirds of which funds Medicaid for 6 million New York residents.

Galef noted that many residents expressed alarm to her at the results of the presidential election, especially because the race “is the only election in which you don’t win when there’s one more vote for you than for the other person.” (Hillary Clinton won the popular vote but lost the electoral vote to Trump.)

New York belongs to a compact of states that have pledged to cast their Electoral College votes for the popular-vote winner. The states in the compact represent about 165 of the 270 votes required to prevail, she said. 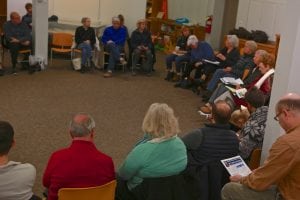 Those in attendance generally backed legal changes to make it easier to vote before election day and by absentee ballot, and to reduce the number of elections in New York, where the presidential, congressional and state primaries take place at different times and where school district, fire district and, often, village elections, are not aligned with any of the primaries or the national election.

“We can change all that on the state level,” Galef said. “A lot of election law gets stopped because the political parties have their own views on this” and fight various reforms.

While absentee-ballot voting has become easier in state elections, problems still arise in school and fire district elections, she said. Last fall, some Garrison voters objected when the newly formed Garrison Fire District held an election for its commissioners but did not allow for absentee ballots.

One participant, who did not give her name, berated Galef for not opposing proposed legislation to allow terminally ill people with less than six months to live to kill themselves with lethal drugs.

The woman contended that insurance companies would use the law to stop paying for medical care for the seriously ill, calculating that a fatal drug dosage would be less expensive than ongoing care. She likewise asserted that people suffering from depression would use the law to end their lives.

“I’m going to ask you all to think about this,” Galef replied, noting that constituents who have contacted her on the issue favored the legislation. “You may not want to do it, but maybe someone else would.” 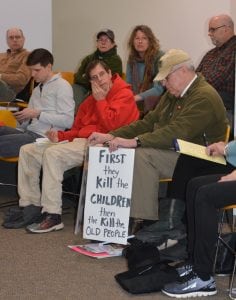 Rob May (second from left) wants the state to deny a permit to the Algonquin pipeline project. The man with the poster objected to proposed state legislation to allow the terminally ill to commit assisted suicide. (Photo by L.S. Armstrong)

A second “death-with-dignity” adversary, who also did not give his name, predicted that “first it’s insurance, then it’s coercion” and displayed a sign that read “First they kill the children, then they kill the old people.” A heated argument briefly ensued among those in the audience.

“You don’t represent me,” one man said to the protesters. “I want to be the one who makes that decision.”

“This is the debate we’ve been having in Albany,” Galef observed.

Betsy Calhoun of Garrison said she opposed the state subsidies sought by Cuomo to keep nuclear power plants functioning upstate, even as the Indian Point plant near Peekskill shuts down, while New York transforms into a user of clean energy. “It’s a total waste of money,” Calhoun said. “It’s a wrong, wrong decision.”

Galef replied that if all the nuclear plants in the state were closed, “I personally don’t believe we’d have enough power.” Moreover, she said, “nuclear energy doesn’t spin off anything with the environment that is negative.” She added, “You can disagree,” as some attendees seemed poised to contradict her.

Another Garrison resident, Rob May, asked for help in denying a state permit to the Algonquin natural gas pipeline, which would run under the Hudson River, past Indian Point and across Putnam County on its way to New England. May and others argue that the pipeline, carrying “fracked” gas, threatens humans and the environment. “It just doesn’t seem right than an explosive pipeline should be that close to a nuclear plant,” he said.

Galef said she opposed the pipeline but warned that the interstate nature of the project means the federal government controls the regulatory process. “I don’t think there’s anything left to do” at the state level, she said.