In a unanimous vote at its March 7 meeting, the Cold Spring Board of Trustees passed a law to establish a Community Choice Aggregation, a collective with other municipalities to lower the cost of electricity or select renewable sources such as through wind and solar. The only change participants see on their monthly Central Hudson bill is a line that identifies the supplier of the electricity. Residents and small businesses can opt out of the program at any time.

The CCA program is being presented to municipalities by Renewable Highlands, a nonprofit led by residents Mike Rauch and Jason Angell. Legislators in Beacon, Philipstown and Fishkill have signed on, and Wappingers Falls is considering it. CCA member municipalities can purchase electricity by the lowest price or select renewable sources such as wind and solar produced in New York state. 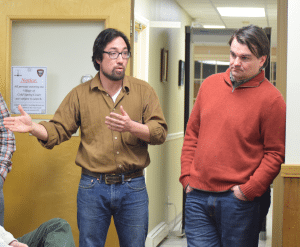 Renewable Highlands’ Jason Angell and Mike Rauch at the village board meeting (Photo by M. Turton)

Rauch said that the next step for Cold Spring is to select a firm to administer the program. It will be keep a small percentage of the savings realized. He said Cold Spring residents should see savings of 5 percent to 10 percent on their bills.

In other business on March 7…