On March 13, The Current hosted a forum between the four candidates for two open seats on the Cold Spring Village Board, as well as the two candidates for mayor. The questions posed by reporters Michael Turton and Liz Schevtchuk Armstrong and the candidates’ responses below have been condensed. The polls will be open from 6 a.m. to 9 p.m. Tuesday, March 21, at the firehouse on Main Street.

Fran Murphy (incumbent): I have no problem with it. I don’t think it’s a lot of money.

Peggy Schatzle (challenger): I would have to talk to the residents and get their feelings. The municipal parking is being used more by tourists. Residents in [nearby] Springbrook are parking near the ballfield now, and there’s congestion there, as well.

Frank Haggerty (challenger): I am on the parking committee and voted for $1-an-hour, but I hoped it would only be during peak hours and the rest of the week the fee would be very low, or maybe free.

Marie Early (incumbent): In another few months the village will have 12 months of metered parking under our belt. At that time we can assess whether we want to go to a lower rate. The $1-an-hour has brought in over $20,000. It’s been a great asset. I’m inclined to leave it where it is.

On the need for firehouse repairs

Schatzle: I will find different ways to help firefighters because it’s a disgrace that they have been putting up with these problems. It is falling apart. This building is a village asset and there’s been no resolution. They rescue people. They were told they could go back to their firehouse with no air conditioning. They would like the repairs to be done, which should’ve been done years ago. 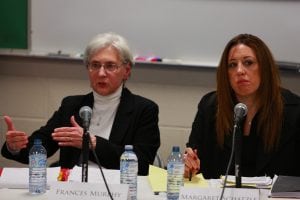 Haggerty: The facility is also used for other purposes — as a community center, meeting space, emergency shelter. So there’s multiple reasons to invest in and rebuild, and it’s probably the biggest single item the village faces in terms of expenses, maybe $5 million to $7 million. We should initiate a referendum to get people voting. Will taxpayers support a $3 million to $6 million bond? It’s a prudent investment. Also, repairs have to be made.

Early: We expect to have in the 2017-18 budget a line item for a new roof. Air conditioning we haven’t discussed in specifics. I agree there’s a need. The office is air-conditioned; front room is air-conditioned. I don’t think the firetruck room needs to be air-conditioned. The fire company provided a list of items of they’d like to see done. We have asked them to monetize that number so we can understand how much money we’re talking about.

Murphy: I don’t think anybody is looking at a $5 million to $7 million building or even a $3 million to $4 million building. It’s not something we’re going to ask taxpayers to foot the bill for. We are very aware our firehouse is a village asset. The roof is leaking. It’s our building. It is not going to fall apart. And it’s not that we’re not being transparent. We discussed that roof in an open meeting. As things are presented, we are moving on them.

Haggerty: It would encourage more openness. Communication could be improved.

Early: Certainly it’s something that could be tried. We’ll get opposing points of view and maybe some good ideas. Currently every single village meeting is videotaped. All are put on YouTube and the monthly meeting is put on the public access TV channel. So there’s an effort on the part of the Village Board to communicate to anyone who wishes to see what’s going on.

Murphy: A “town hall” meeting is an interesting concept. All of our village meetings are open to the public. We have a Facebook page, another opportunity for people to get information. 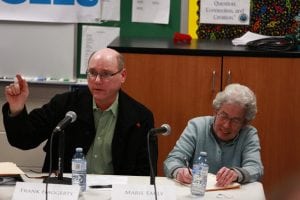 On the future of the Boat Club

Early: The Boat Club lease has seven years left. The intention of the village is to honor the lease. If we receive income from that land, we’re liable for taxes. So the income would have to far exceed the tax. Certainly you could envision a restaurant there for people in the village and tourists. If the Boat Club wishes to put up a building, the village has to say, “Can the new building be structured such that there are some facilities of benefit to residents or the larger population?” Whether we lease it, do a land lease for some facility there, the options are pretty broad. Yes, the Boat Club can continue there. If they wish to build something and have the money, it’s their prerogative.

Murphy: The Boat Club would like to put a building there. But they’re not able to unless we extend their lease to something they can go to a bank with. They’re asking us to give them another 20 years on their seven-year lease. We’re not anywhere near to agreeing.

Schatzle: This is news to me about income from the land. It’s about transparency. Issues like this are not really brought to the public. Of course the comprehensive plan’s approach deserves support.

Haggerty: The comprehensive plan approach — why would I not support it? But it sounds like it maybe has conflicting objectives — income, or access for residents. The Village Board should organize a special committee of the board and Boat Club and hash this out.

On repairing the village dam

Murphy: The holdup is we need to update our connection to the New York City aqueduct. We’re getting ready to move on it.

Schatzle: I would have to work with the engineers and try to move the process quicker.

Early: The engineering report is due next month. We’re hoping it comes in with reasonable amounts so there’s a way forward to do repairs.

On why they should be elected

Schatzle: Our village is in crisis and in risk of going bankrupt.

Murphy: We are nowhere near being bankrupt. The village has a very comfortable general fund balance of more than $500,000. We are doing very well. I’ve put a lot of time and effort in this; I’d ask you would allow me to continue. I enjoy what I do. I feel I owe that to the village.

Haggerty: The village is underfunded and therefore overloaded. Because of that and for other reasons it is mismanaged. The Village Board is overworked. They’re making mistakes. Some people believe there’s a transparency issue. Part of that is because village officials are under pressure and trying to get as much done as they can. But it’s not working.

Early: The village budget is dictated by the New York State tax cap. I’d love to have more money, but we can’t raise our taxes to generate more. We got a lot accomplished in two years. We have a proven track record. I ask you to re-elect us so we can do more for you.