Once a month, instead of the clanging trays and silverware of the Haldane school cafeteria, music fills the air for the students, played by their peers. Classical Café is a once-a-month series that merges lunch with food for the soul as performed by elementary- and middle-school students under the guidance of Haldane parent and Broadway musician Greg Smith and music teachers Kathy Sireno, Melissa Frabotta and Dan McGroarty.

Classical Café resembles an organized free-for-all, meaning that the organizers don’t always know who will perform, or what they’ll play, until the last minute. Students can sign up or appear impromptu. At the March 13 café, Smith noted he had just been told that 17 ukulele players wanted to perform. 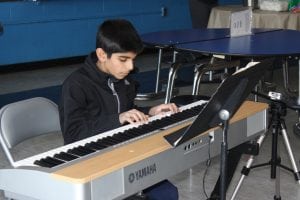 Raunaq Kapoor was the first to perform, tackling “Rhythm Machine.” (Photo by A. Rooney)

As the first group of students came into the cafeteria, Smith welcomed them with Bach’s Goldberg Variations on the keyboard while explaining the background of the piece. When sixth-grader Raunaq Kapoor volunteered to perform next, Smith suggested he first finish his lunch. Kapoor ate fast, then got the room jumping on the keyboard with “Rhythm Machine.”

A table of sixth-grade girls said they appreciated his performance and Classical Café. “A lot of kids come and play instruments who I didn’t know could,” said one. Another added, “It’s something new, and it’s entertaining.”

As students streamed in and out of the cafeteria during lunch periods, the musicians kept on coming. “When you’re practicing in the waiting room, you get very nervous, but when you’re out there playing, it’s actually so much fun,” said Elliott Goldberg, who performed in a flute trio with Amanda Johanson and Mairead O’Hara.

Next came a quartet of sixth-grade girls — Isa Schmidt (trumpet), Kate Meisner (clarinet) and sisters Niamh and Fiona Fortuna (both on flute). TAsked if it was intimidating playing for classmates, Meisner offered that she didn’t mind playing for other grades, “but I hated playing in front of my brother!” Schmidt said she enjoyed the performances because they create an opportunity for students who “want to do a music performance but not a band performance, which is where you’re one of many.”

Vocalists were part of the proceedings, as well. Helen Chiera, who tackled “Titanic” from the musical Heathers, said afterward that performing  in the cafeteria for her peers was “worse than NYSSMA” (for the New York State Music Association programs in which students perform solo for a judge). “It was terrible and terrifying,” she said with a smile.

Even some spoken word entered into the mix as Graeme McGrath had fun with a recitation of Five Little Monkeys. “We have just gone cabaret,” Smith observed. When he finished, the appearance of chairs and music stands signaled the arrival of the sixth-grade music class and its ukuleles, along with a few percussionists. 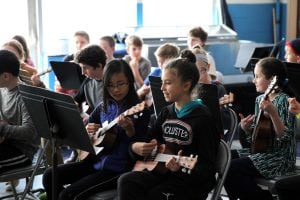 Together with their teacher, Frabotta, they launched into a rousing rendition of “When The Saints Come Marching In.” Frabotta explained to the diners that it was the first song they had learned together. “Everyone has had experience playing five or six chords now,” she said.

As younger elementary students arrived to eat, many were eager to take the microphone, with the line at least 15 students deep at one point.  The set included several renditions of “Twinkle Twinkle Little Star.” When one girl sat behind the keyboard, a classmate was overheard saying: “I wanna see this. Delia’s really good at piano.”

Photos by A. Rooney and Sheila Williams

One thought on “Classical Café”