A spring storm for the ages 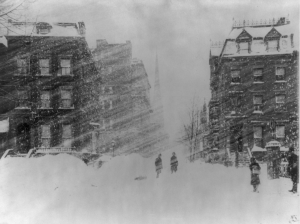 On March 17, the editor of the Cold Spring Recorder wrote:

There were the biggest snow drifts of the season in front of the businesses on the north side of Main street. Traveling was nearly impossible. Business was almost suspended.

At 9:33 a train of four coaches drawn by two engines went south, and that was the last one for two days…. And still, the snow came down…. Boyd’s thermometer read 12 degrees. So did Spalding’s. The climb of Main Street hill was the most difficult ascent we ever made…. At 8 o’clock the temperature was 10 degrees and going lower. And still the snow came down – and crosswise – and around….

On Tuesday morning [March 13] our first look-out was to our neighbor’s directly opposite. The drift was 1 foot above his kitchen windows and his yard fence was out of sight…. Along Main Street from the Methodist church to the town hall, the deposit was from 2 feet in the middle to 6 feet, the height of the stone wall on the south side. And yet the wind blew, the snow deposits were growing and the mercury at 4 degrees…. 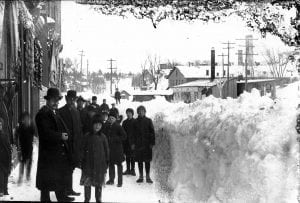 From High Street to Church, there were more heaps of snow, always on the north side. The south sidewalks, for the most part, were blown almost bare…. This is the first day since a long time ago that our principal milkmen have been completely “knocked out.”…

It was at 2:50 p.m. [on Wednesday] that the unusual event of a funeral cortege, composed exclusively of men, came up the hill in single file, two men bearing the bier, upon which were the remains of the late Marvin Wilson, to the place of temporary interment. So deep was the snow that no other mode could be adopted, since but a single path, beaten by passing feet, was practicable…. Two by two, the devoted friends bore our inanimate neighbor to the wider path in Nelsonville.