Samantha Lisikatos, a 2014 Haldane graduate, averaged five points, 2.5 rebounds and three assists during the 2016-17 season for the SUNY Oneonta women’s basketball team, which finished at 15-11 (12-6 conference).

The junior guard scored a season-high 14 points and had seven assists against Clarkson on Nov. 19. 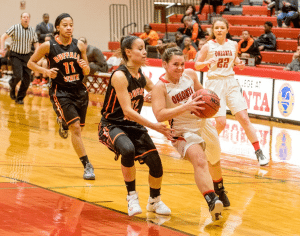 Sam Lisikatos drives to the basket against Buffalo State on Feb. 3. She had six points and six assists in the win. (SUNY Oneonta photo)