To mark the 100th anniversary of New York in 1917 becoming the first eastern state to enfranchise women, 100 female artists from the Hudson Valley have contributed to an exhibit at the Howland Cultural Center in Beacon. Called 100!, it continues through Sunday, April 2, as part of Women’s History Month.

At the opening on March 4, the Howland Center’s force of nature, Florence Northcutt, who earlier that week announced she would be stepping down as board president, was honored for her 30-year dedication to the center. She was presented with flowers and a gift, but remarks were kept to a minimum owing to her wishes that a fuss not be made. The Dutchess County poet laureate, Bettina “Gold” Wilkinson, read a poem she wrote for the occasion. 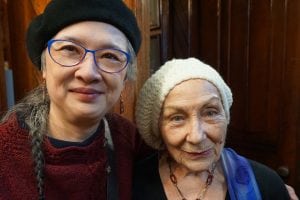 Bibiana Huang Matheis and Florence Northcutt at the opening of the 100! exhibit (Photo by Frank Matheis)

Bibiana Huang Matheis, a photographer and painter, conceived of the exhibit and served as its curator, inviting artists within a 100-mile radius of Beacon to contribute. She says she told contributors to “show what you want to show, bearing in mind the size of the space” but provided no other guidelines. As a result, the contributions vary greatly in terms of media, intent, size and focus and include paintings, sculpture, ceramics, photography and even armor.

Huang Matheis, whose family emigrated from China, says that part of the desire to come here was based on freedom of speech and voting rights. “We didn’t take that for granted,” she says, adding that about 20 percent of the artists exhibiting happen to be immigrants. Working with so many artists at once was “quite a test,” she admits. “When the artwork started to arrive, in all shapes and sizes, it was a big puzzle to put together. But somehow they all fit, in a magical way.” 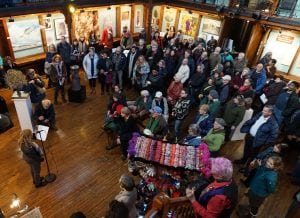 Bettina “Gold” Wilkerson reads a poem she wrote for the occasion at the 100! opening. (Photo by Frank Matheis)

A number of works were created specifically for the exhibit. A wool installation by Mimi Czajka Graminski includes a flowing mass of red, acknowledging women’s voices. Amy Manso’s piece is made from recycled plastic materials, evoking the recent women’s marches, while Amy Farrell contributed a pencil-and-ink drawing of 100 women.

Much of the work deals with issues of freedom and liberty and of having one’s own voice. “There’s not much protest art,” Huang Matheis notes. “Instead it is about pulling us together.”

The exhibit is open from 1 to 5 p.m. Friday through Monday, with the exception of Sunday, March 19, when it is closed due to a concert presented by the Howland Chamber Music Circle. The cultural center is located at 477 Main St.