Journeyman baker brings bread from his house to yours

“I get these people who are, like, rabid fans of the bread,” explains Michael Sellers, the man behind the bakery. “And they call me upset because they’re driving around Peekskill and they can’t find my store.” 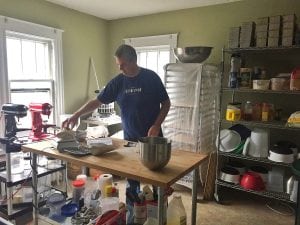 Michael Sellers of Journeyman Bakery in his workspace (photo by B. Cronin)

The problem is that there is no store. Sellers operates from a spare bedroom in his home. There, in less than 150 square feet, he cranks out up to 150 loaves of exquisite bread a week. When frustrated callers find this out, it leads to further questions, such as “Can I just come by your house?”

Sellers sells one- and four-week subscriptions at journeymanbakery.com. He began with two customers in June as an add-on to the Glynwood Farm CSA and now has 150. (He also sells loaves at the farm’s store.) Every Wednesday at 5 p.m., he cuts off orders for the week and feeds his sourdough starter. Thursday he bakes, using a three-level oven the size of a small dishwasher that can bake a dozen loaves at once. Friday, he drives around an ever-expanding delivery area (currently from Beacon to the north to White Plains to the south). Some Saturdays he’ll set up at a farmers’ market. By Sunday, he’s done. Call him on a Sunday, and there is no bread for you. “I don’t like to hold the bread for more than two days,” he said. 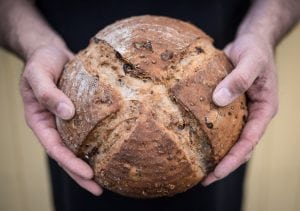 Sellers holds a loaf of his bread. (Photo provided)

Sellers doesn’t plan on hiding in his room like a baker-monk forever. “I thought this would be cool in the beginning, you know, this solitary life,” he said. “But it gets very boring, very quickly.”

He has had a lot of time to think about bread.

“My whole philosophy behind bread is that you’re creating a product that’s actually feeding a community,” he said. “Communities all across the world all live on bread. I want a place that I’m comfortable working in and can produce a lot of bread but that also becomes a gathering place. I want to get involved in the local politics, the local city stuff, not just be the baker guy.” 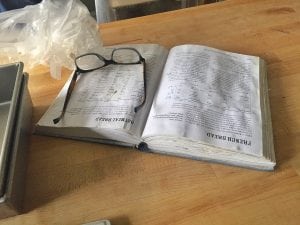 Tools of the trade (photo by B. Cronin)

Sellers says he is looking for a location in the Hudson Valley that needs a gathering place, which rules out Beacon, which already has three bakeries, including one that inspired Sellers. “I like the vibe you get at the Beacon Bread Company,” he says. “You go in and you can just sit down and talk to people. That’s what I’m looking for.”

Sellers spent 20 years working in communications for New York City hospitals but says a weeklong class at the King Arthur Baking School in Vermont changed his life. “I had been baking bread on my own for years,” he said, but it was during the class he realized he might be able to do it for a living. He kept studying and apprenticing, including a stint in Portland, Oregon, with Tim Healea of Little T American Bakery, who had similarly left his job in New York publishing to attend cooking school. 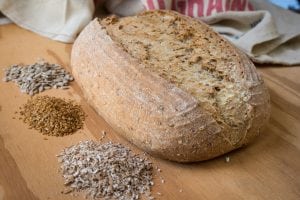 It was when people Sellers didn’t know became fans of his bread that he knew he was ready to leave the office behind. “When your friends try the bread, you know they’re going to say nice things,” he said. “But when complete strangers tried the bread, liked it, and wanted to know if they could buy some, that’s when I knew it could be something.”

Until he finds a place of his own, he’ll continue lugging 50-pound sacks of flour up his stairs. “If I can find a retail space that’s large enough, I want to put in a mill and mill my own flour in-house,” he says. “I know a lot of people who are doing that, and they swear you can taste the difference.”