To students at Haldane High School, the word immersion has taken on a whole new meaning. Hosted by Haldane’s Foreign Language Department, Immersion Day once again opened its doors to cultures worldwide on March 2 at the Taconic Outdoor Education Center. Though this annual event carries a reputation difficult to top, Immersion 2017 was one of the most impressive.

After asking a few students their opinions of the trip, there was an outstanding appreciation of the culture and events presented. Sophomore Adam Silhavy, a French student, identified with the consensus of Immersion’s success. “I had a lot of fun at Immersion,” he said. “Overall I’d say that the most positive experiences at a cultural level were the student talent performances.” 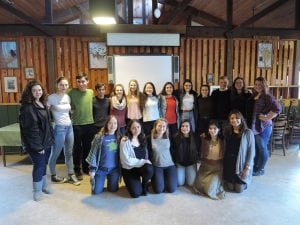 The performances are part of an Immersion tradition called The Coffee House. Students were able to showcase their artistic talents while incorporating the cultural themes of the trip. Some chose to sing, others wrote poems, and three students filmed a video commemorating the foreign-language teachers with a humorous tone that had the entire room laughing.

“The idea to make a video about the teachers came from the fact that we know so little about their lives outside of school,” explained senior Brooke Vahos, a contributor to the film. “They always mention small details about their lives in class that make you interested in who they really are.”

Besides the Coffee House, the teachers had a itinerary of events planned. Some things, like the presentations, split the French and Spanish students into groups so that each group could learn more about cultures concerning their respective languages. 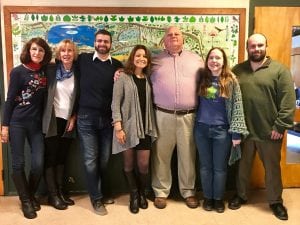 The Spanish group listened to former Haldane student teacher Ricardo Vargas’s account of his trip to his home country of Costa Rica. Afterward, students were able to create their own currency in the colorful style of the Costa Rica colón. French students heard from Carolyn Llewellyn about her experience in the Peace Corps in Niger, a former French colony that today faces many socioeconomic problems including malnutrition and lack of access to health care.

Both sets of students also participated in a moviemaking activity with Mary Holmes, who showed a short film by Pixar called Creepy and had the students recreate the film in Spanish or French.

Another staple activity at Immersion is the dancing. This year instructors from the Fred Astaire Dance Studio and Pentagrama taught students the tango, salsa and the dances of the Huaylas de Huancayo. The dances were a big hit, as it gave them a chance to experience the culture that they had been learning about for years. 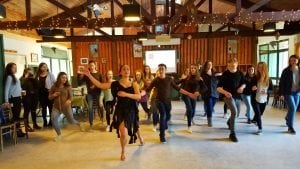 Among the activities were instruction in tango, salsa and the dances of the Huaylas de Huancayo by the Fred Astaire Dance Studio and Pentagrama. (Photo provided)

“The atmosphere was bumping,” said junior Aidan Cimino, who said his favorite dance was the tango. Everyone seemed to respond positively to the, “bumping” atmosphere  and genuinely looked as if they were having the time of their lives.

Acting as one of the designated photographers, junior Lucinda Strol was able to have an outside perspective of some of the activities. “As a photographer for Immersion this year, I could really see how much people enjoy this trip; especially while dancing and at the student Coffee House House event.” 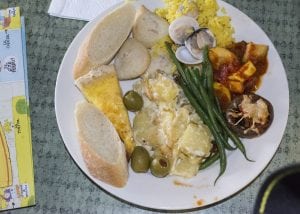 A lunch of Spanish and French foods (photo provided)

Food is a cultural backbone and it could be said that the food at Immersion is the backbone of the trip. The kitchen staff at the Taconic Outdoor Education Center did an amazing job preparing foods from around the world which included; quiches, ratatouille, paella, and countless other delicious dishes. They even provided options for various dietary restrictions, so everyone could have the complete Immersion experience.

According to senior Teresa Figueiras, who is president of the International Club, Immersion can be summarized into three things: “Great food, fun presentations, and a good time.” Immersion is the product of these simply put words. The student body of Haldane truly appreciated this annual trip as one of the many highlights of our high school experiences at Haldane.

Dwyer is a senior at Haldane High School.