If you need help lowering your energy bills, Beacon has your back.

On Tuesday, March 28, at 6:30 p.m., the city will launch its Energize Beacon program at the River Center in Long Dock Park. Funded by the New York State Energy Research and Development Authority (NYSERDA) and operated in partnership with the city’s Conservation Advisory Committee, the program offers homeowners an on-site assessment to find inefficiencies. More than 90 percent of Beacon residents will qualify for a free assessment, officials said, and Energize Beacon will then help find accredited contractors, subsidies, incentives and low-interest financing.

The program is an offshoot of Energize NY, which was created in Westchester County in 2011. It has since “energized” more than 1,025 homes, which it estimates has created nearly $13 million in economic activity, $5.1 million in energy savings and the reduction of 5,125 tons of greenhouse gas, or the equivalent of removing 1,068 cars from the road. 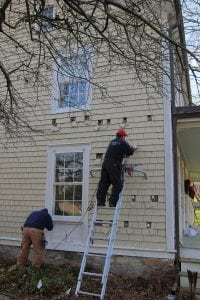 The state, eager to see similar successes in other counties, has expanded the program to three communities in the Mid-Hudson Valley: Red Hook, Hyde Park and Beacon.

Tom Bregman, a senior consultant with Energize NY who wrote the grant application to bring the program to the Hudson Valley, said it focuses on “building science,” which he defines as  “the interaction between the climate, weather, humans and the systems that heat and cool homes.”

While the presentation on March 28 will provide plenty of free or low-cost home improvements, Bregman hopes to recruit homeowners for the free assessments, which typically takes two to four hours.

He says that although many people assume window replacement is the priority, typically it’s an expensive investment when compared to the energy savings it would provide. Instead, “the most common suggested improvement that comes out of the assessment is sealing and insulation in the attic and in the sills and around any exposed interior basement foundations, and sealing up holes that people can’t see,” he said. “Those are also the most cost-effective improvements.” 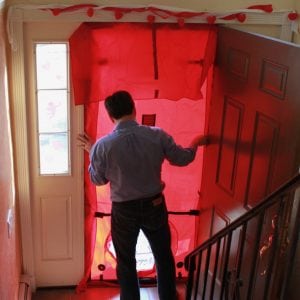 Norm Jen, an “energy coach” who works with Energize NY, sets up a blower-door test to identify drafts. (Photo provided)

After insulating and sealing the basement and attic, which Bregman refers to as the “hat and boots” of the house, the next most common suggestion after an assessment is to upgrade the home’s HVAC system. That could range from replacing an older, low-efficiency boiler to insulating ductwork and sealing gaps around windows.

“This is something that individuals can do to have an impact on their personal daily lives, their cash flow, reducing their energy costs, making their home more comfortable, and that translates to a lower carbon footprint,” said Bregman. “When you’re using 20 percent less energy, it means you’re emitting 20 percent less greenhouse gas.”