The Who’s Tommy and The Drowsy Chaperone

High school musicals are a staple of March, capping off months of late-night winter rehearsals with some roar-of-the-greasepaint glory. Haldane recently staged Into the Woods and Beacon High School and O’Neill High School in Fort Montgomery, which many Garrison residents attend, are gearing up for shows of their own.

The Beacon and O’Neill productions couldn’t be more poles apart, as Beacon revs up the 1969 rock opera, The Who’s Tommy, and O’Neill serves up a valentine to musical comedies of the 1920s with The Drowsy Chaperone.

Tommy began its life as the popular album (20 million copies sold) by the British band The Who. A film adaptation was done in 1975, but it wasn’t turned into a Broadway musical until 1992. Chaperone debuted in Toronto in 1998 and finally made it to Broadway in 2006 for a successful run.

Performances for both musicals are scheduled for Friday, March 31, and Saturday, April 1, at 7 p.m. and Sunday, April 2, at 2 p.m.

At Beacon High School, the students help choose each year’s musical (this year there were two, including a fall production of Grease). Director Anthony Scarrone had a few suggestions, including Mary Poppins, but the teens weren’t buying it.

“They told me, ‘We really want to do something with a little more craziness to it,’ ” he says. “Tommy came up, and that was that.” 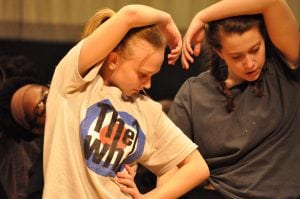 He notes the show has only three or four lines of dialogue, “so it really is a rock opera, with these incredible songs: ‘Pinball Wizard,’ ‘I’m Free,’ ‘Sensation.’ But the story of the pinball-playing, deaf, mute and blind boy who triumphs over his adversities is important in it. There’s a boy who is totally affected by a traumatic event, which his parents don’t recognize right away. They have to come to recognize his talent and allow themselves to be happy about things. It’s a beautiful storyline.”

The high school actors, known as the Beacon Players, are joined in the production by Beacon fifth- through eighth-graders cast through auditions. 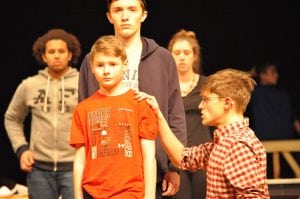 Scarrone says he believes the production values will surprise audiences. “We have the stage raised up four feet above our regular stage — it gets pretty intense. The band is onstage. There are eight pinball machines, which move around on their own. There are trap doors into this new stage for some of the characters to rise out of. There are more costumes for this show than any other show I’ve done. We have World War II-era jackets, hand-made, and regimental uniforms. There’s also lots of video footage, streaming across the stage, for example when Captain Walker is shot down you see black-and-white images of parachutes descending. We go from the 1940s to the 1960s.” 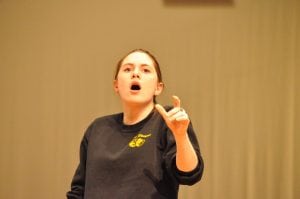 Scarrone directed Tommy some 20 years ago and said he has enjoyed repeating the experience. “I’m loving reliving it all with different kids who have different ideas,” he says. “Our music director, Susan Wright, has moved them from musical theater to the style required for this music. We have one boy, who plays Cousin Kevin, who has never been on stage before but has played in a rock band for four years. Then there’s the ability to add today’s technology to the show.”

Referring to last spring’s production, Scarrone puts it succinctly: “This ain’t no Peter Pan. This takes them down a whole new path.”

This year the Beacon Players launched a “First Look” event on March 10 in which students from a number of high schools in the region came to Beacon to preview excerpts from all the troupe’s musicals.

Tommy will be performed in the Pete and Toshi Seeger Theatre at the high school at 101 Matteawan Road. Tickets, which are $12 for general admission and $5 for seniors and students, can be purchased at the door or at beaconplayers.com.

A show within a show is the conceit of The Drowsy Chaperone. This makes for a fun combination of contemporary wit mixed with old-fashioned musical theater, comedy and dance. As a musical-theater devotee known as Woman in Chair spins the soundtrack of her favorite show, it comes to life. Her droll commentary brings the audience in and out of the show, which features archetypes such as the 1920s follies girls, silly crooks, butlers and a tipsy chaperone. 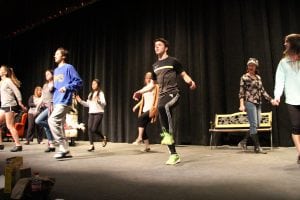 Ethan Penner of Garrison and members of the cast rehearse “Cold Feet” from The Drowsy Chaperone. Director Christine Brooks Bokhour is in the background. (Photo by Mary Ann Ebner)

Director Christine Brooks Bokhour of Cold Spring, who is working with O’Neill students for the third time, said the actors had a study tool that became available only in the past decade or so: YouTube clips of the show and from the period, which have helped them model manners of speech, singing and carriage.

“They ‘get’ the style,” she says. “I have told them to watch clips of silent films, to see how dramatic they were.” 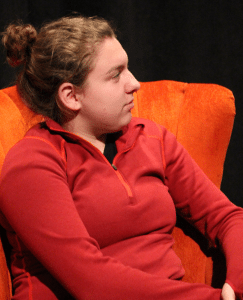 The director describes Chaperone as “a modern commentary on the classic style of musicals. It’s both a celebration of them and a send-up. It’s written for laughs and plays so well with any age kids playing these roles. It’s witty, it’s wacky, and the music is so, so great.”

Bokhour, who danced on Broadway, is going back to basics with this show — she started a tap workshop for the students in January and says she has been impressed. 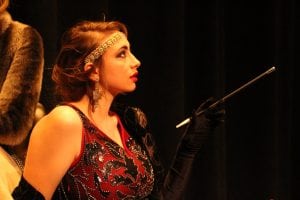 The musical director of the production is Paul Heckert of Garrison, and the cast includes Alexandra Angelopoulos, Ethan Penner and Isaac Walker of Garrison.

Tickets at the door will be $12 for adults and $6 for students and seniors. To reach the high school, cross the Bear Mountain Bridge and take Route 9W north to the Highland Falls exit. At the top of the ramp make a left and the school driveway will be on the right. The address is 21 Morgan Road, Fort Montgomery.

* denotes a member of the Beacon Players