Depot Docs, the ongoing documentary series at the Philipstown Depot Theatre, will screen Best of Enemies at 7:30 p.m. on Friday, March 31, followed by a discussion and reception with executive producer Julie Goldman. 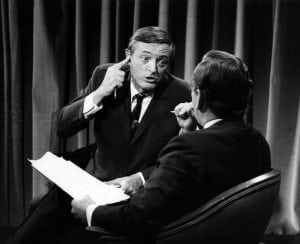 The film examines debates broadcast on ABC-TV during the Democratic and Republican conventions in the summer of 1968 between William F. Buckley Jr., a leader of the new conservative movement, and Gore Vidal, a leftist novelist and polemicist.

Their exchanges, which drew huge ratings, have been compared to rounds of a heavyweight fight, filled with policy debates and insults. For tickets, which cost $20, call 845-424-3900 or visit brownpapertickets.com.