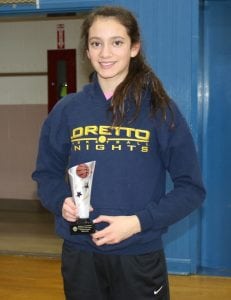 Chiera, who attends Haldane, was tied after the first round with another 12-year-old competitor after hitting 14 of 25 free throws. She hit three of five in the tiebreaker to win by one shot and will represent Loretto Council No. 536 at the Knights of Columbus state finals at West Point on Sunday, April 2.