Boscobel opens for the season April 1 with a calendar of events that includes regular behind-the-scenes tours and the start of its Bring the Kids series at 9:30 a.m. on Saturday, April 8. Designed for children age 4 and older, the series continues on the second Saturday of each month through December with hands-on chores, a tour, games and a craft. 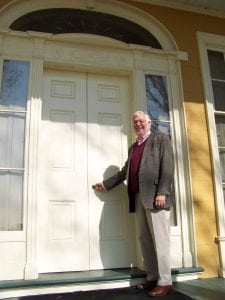 Steve Miller, executive director of Boscobel, prepares to open its doors for the season on April 1. (Photo provided)

The site will also host two design lectures in April. On Friday, April 14, curator Jennifer Carlquist will discuss how the Federal-era Boscobel mansion was relocated to Garrison from Montrose after being sold to a wrecker. On April 28, Edwina von Gal will speak on toxin-free land management practices. Both talks begin at 6:30 p.m. See boscobel.org.