I-87 pipeline latest plan to move petroleum along Hudson

For those worried about pipelines crisscrossing the country, the news has not been reassuring lately.

A pipeline operated by Spectra Energy began operating in January, carrying natural gas north along the Hudson River past the Indian Point nuclear power plant south of Peekskill. The Keystone XL pipeline from Canada to Nebraska has been given the go-ahead by the White House after being rejected by President Obama. And this week, oil began flowing through the contested Dakota Access Pipeline, another project halted by Obama but revived by President Donald Trump.

Closer to home, a $1 billion, double-barreled pipeline is planned for both sides of I-87 on the west side of the Hudson River, and activists are wasting no time in trying to block it. On Tuesday, April 4, at 7 p.m., the Beacon Democratic Committee will host a forum on the Pilgrim Pipeline project at the Howland Cultural Center, with representatives from environmental groups and the office of state Assemblyman Frank Skartados. 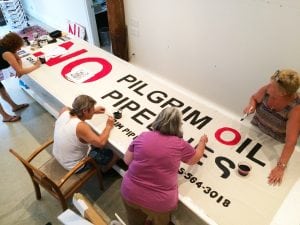 Janie Mucci, Dave Mucci, Marge Mercier and Dee Carbone, all residents of Newburgh, prepared a banner last fall for a protest against the proposed pipeline. (Photo by Amanda Means)

The proposed pipelines would be placed two to three feet underground for 170 miles from Linden, New Jersey, to Albany. According to Pilgrim Pipeline Holdings, one pipe would carry 200,000 barrels of Bakken shale oil south daily from Albany to New Jersey while the other would transport 200,000 barrels of refined products such as gasoline, diesel, heating oil and jet fuel from the New York harbor to points north.

The company says its preliminary plans for the project, which it says will cost up to $1 billion, call for pipes no larger than 24 inches in diameter. Two single pipes would branch off from the pipeline, including one that would follow the Quassaick Creek through New Windsor and Newburgh to waterfront refineries.

Not so fast, says Sandra Kissam of Orange Residents Against Pilgrim Pipelines (Orange RAPP). Based in Newburgh, the group has been protesting the pipeline and lobbying municipalities to oppose the project, which she said is “generally acknowledged to be a threat to our local quality of life, environment and residents.” 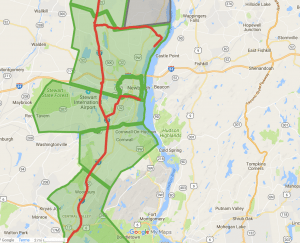 A map prepared by the Coalition Against Pilgrim Pipeline shows the general route of the proposed pipeline near the Highlands. Municipalities outlined in green have passed resolutions opposing the project. Two lateral pipes would carry petroleum to the waterfront.

The pipeline as proposed would cut through three rivers used for drinking water, two aquifers, hundreds of smaller regulated streams and residential neighborhoods, opponents say, and Bakken crude oil is known to be highly combustible and volatile.

Pilgrim Pipeline Holdings counters: “The differing levels of volatility inherent to different types of crude are rendered moot during pipeline transportation, as there is no air pressure or jostling that occurs inside a pipeline — the necessary factors for an explosion to take place.”

Beyond their environmental concerns, Riverkeeper’s Jeremy Cherson and Scenic Hudson’s Audrey Friedrichsen, who will both speak at the forum, argue the project doesn’t make much economic sense. Cherson claimed the terminals in Albany and Linden have said they don’t want to deal with crude oil from the pipeline, “so we’re not sure who this pipeline company wants to do business with.”

Friedrichsen added: “Since the completed pipeline would be digitally monitored, the number of permanent jobs this project would produce is around two. Our region would bear all of the risk and receive none of the reward.” 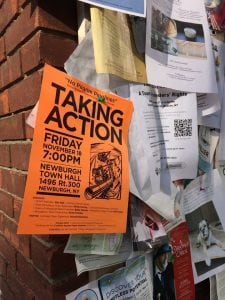 Pilgrim Pipeline Holdings says construction of the pipeline would create 2,000 union construction jobs and that the project “will provide the region with a more stable supply of essential refined petroleum products.” Further, it argues, “the pipeline will provide the region with a far safer and more environmentally sound way of transporting petroleum products.”

Cherson said that while the pipeline might be seen as a better alternative to to move oil along the Hudson than trains or tankers, “it’s not an either/or proposition. It’s different companies, and different industries, pushing for these different proposals. There’s some connection in that they’re proposing to move the same product, but they each have their own financial interest.”

“This product is going to come down the Hudson Valley every which way this industry can find,” said Friedrichsen.

Since Pilgrim first proposed the pipelines in 2015, the company has not sought permits for the project except from the New York Thruway Authority, which oversees the freeway and its right of way.

Cherson and Friedrichsen said the delay may be due to the relatively low price of oil, which removes some of the economic incentive for the project. Kissam said she’s heard from landowners in Orange County who say they have been approached by Pilgrim about land rights. She also said that just because the company isn’t pushing ahead with permits doesn’t mean it plans to abandon the project.

“We have a number of examples where pipeline companies have ignored the fact that they don’t have all their permits and just moved forward,” said Kissam. “The Spectra pipeline, near Indian Point, was pushed forward before they had all their permits. These guys are not nice guys. We should not be wide-eyed and innocent and think they’re going to do everything according to the rules.”