Shortly before storm Stella’s last blast of winter, thoughts in Philipstown Town Hall turned to summer — and the challenges it brings as crowds descend on Indian Brook Falls.

“It’s going to get abused again,” predicted Councilor John Van Tassel at a workshop on March 8 as he and other Town Board members brainstormed with residents and state and county officials on how to combat the congestion.

One of the scenic allures of Hudson Highlands State Park, Indian Brook Falls stands near Indian Brook Road, a narrow and historic dirt lane that veers off Route 9D, about a mile south of Cold Spring, and winds uphill through woodlands. 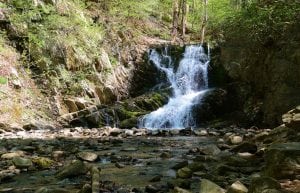 For centuries mostly a local treasure, the waterfall has become popular in the wider world, thanks to the internet. In November neighbors asked the state to close access to the falls, at least temporarily, as a conservation measure.

Moreover, despite bans on swimming, on hot days many visitors treat the falls as a backyard pool, as posts on social media attest.

Thompson noted the relatively low staffing levels for Fahnestock (the site of his headquarters) and Hudson Highlands parks. He advised the residents and Town Board to write Gov. Andrew Cuomo and Parks Commissioner Rose Harvey to plead for more resources. “If you go to the top, that’s where you get results,” he said.

Thompson also suggested the state might provide a parking lot close enough to the falls for convenience but sufficiently distant to protect it. “That’s the best solution,” he said. 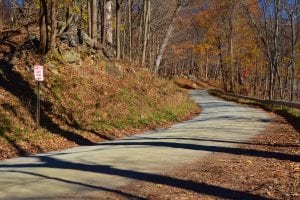 Sgt. William Quick of the Putnam County Sheriff’s Department said he and fellow officers will continue to ticket cars parked illegally on Indian Brook Road and have them towed. “We’re going to help you as much as we can,” he said. “That road is a highway and there should be no parking there.” He blamed many of the parking problems on “citiots.”

Complicating matters, he said, are the private drones that have started to swarm over the waterfall and Audubon sanctuary. He foresees trouble, he said, “if one of these things drops out of the sky and hits someone.”

“I don’t think it’s a good solution to be tying you up, keeping you away from the rest of town,” agreed Councilor Michael Leonard. He suggested that cars parked illegally could be “booted,” immobilizing them until the driver pays the ticket.

Quick replied that while that strategy might work in Manhattan, there are no ATMs near the falls for drivers to get cash to pay their fines. Nor would deputies ferry drivers — often wearing only swimsuits — to Cold Spring, he said. “I can’t be riding around with 18-year-old girls in bikinis in the back of my car.”

Councilor Nancy Montgomery recommended greater collaboration between Philipstown, county and state officials, including lobbying in Albany. “Nobody’s ever gone up there to talk to the governor,” she said.

“Everything you do” helps, Quick said. “Throw everything at it.”

As an immediate deterrent, Van Tassel proposed using boulders to line spots along Indian Brook Road that might be attractive for illegal parking.

In the weeks after the workshop, mounds of snow came, followed by runoff, mud and heavy rains. Van Tassel told The Current on a drizzly March 28 that when the weather cleared he and Highway Superintendent Carl Frisenda intended to scout out the best locations for the rocks.

6 thoughts on “The Rise of the Falls”