“OK, this is kind of complicated: As long as you have the orb nobody will wake up. They have to combine their orbs to make the sun rise.”

With that vivid introduction to her plot, sixth-grader Maya Gelber grabbed the attention of the other young writers at the table, all eager to share their work as part of the Aspiring Writers Experience Club for Tweens and Teens (A.W.E.) led by young-adult author Kimberly Sabatini. The group, launched in August, meets on the first Thursday of each month at the Desmond-Fish Library for an hour of talking and writing.

A recent meeting began with an exchange of ideas, with writers offering explanations of their starting points or talking shop. “I had a dream and got a lot of ideas from it,” said Kate Parker, another middle-schooler. “You get invited to this place; there are kids with special powers which are mined from sapphires. They enchant them and make an army of jewel soldiers.”

Sabatini, who lives in Garrison, encouraged the students while also peppering them with questions. “This is vivid,” she said, “but I want to get a mental picture. Is this a current setting, medieval? What about the buildings — are they like castles, Hogwarts, or futuristic, maybe? Do you have a main character?”

What: Writing class for tweens and teens
Where: Desmond-Fish Library, Garrison
When: Thursday, April 6, at 6:30 p.m.

After this exchange, Sabatini brought out a worksheet designed to get each writer thinking about her work (all six regulars are girls; at this  session they were joined by Sabatini’s sixth-grade son, Aidan). Titled “Seven Major Structure Steps,” the sheet elicited responses to challenges such as the protagonist’s weakness, problems, moral flaw, desire and what plan the protagonist would use to defeat their opponent and reach their goal.

“This is a great way to start the process,” Sabatini explained. “You have a wonderful hook but you still need to come up with your main character and a desire. This is a rough draft that you’re not so emotionally attached to that you can’t alter it. Even a picture book should have all these points.”

A discussion of the word opponent followed, with Sabatini noting an opponent in a story doesn’t always equate to “bad guy.” In fact, it is smart to give the opponent some qualities that a reader can relate to. She drew a comparison to a mother not giving permission to her child doing a risky activity. This opened a window for another writer, Noula O’Reilly, who asked “Can my opponent not be a person?” (“Yes”), and another, Lorelei McCarthy, who had a lightbulb moment, exclaiming “I just figured it out!”

After discussing “battles which illuminate the story — conflict that results in the hero having a self-revelation, which shows change and growth, either psychological or moral” — there was writing time.

“I don’t care if you write or not, I care that you like to write,” Sabatini said of her teaching style. “I always format a  small exercise they can incorporate into their writing, and a lot of this is sharing, talking to each other.”

Sabatini grew up in Beacon and attended Beacon High School, where she said she wasn’t open about her writing. “I absolutely wanted to be a writer as a kid, but I realized that if people read my words, they would know what I was thinking. I didn’t feel brave enough to defend my thoughts.

“Instead of being so vulnerable and honest, I switched to writing things that didn’t have much emotional depth. Not surprisingly, it didn’t feel good. I’ve always considered writers to be amazing and talented people and I just didn’t see myself that way.”

Sabatini, whose young-adult novel, Touching The Surface, was published in 2011, does many school visits, including in Newburgh, where she found an attentive audience. “I was the first kid in my family to go away to college,” she told the students. “I was in the guidance office every day for a year and a half, looking for scholarships and opportunities. At that time no one ever told me about the possible job options open to writers. I was unaware that I could use writing as a path to working for a publishing house, becoming an editor or working in library science. So I became a teacher.” 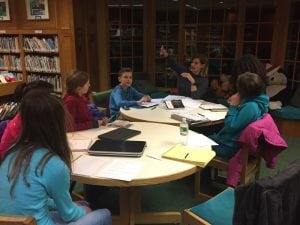 Kimberly Sabatini advises a group of young writers at the Desmond-Fish Library in Garrison. (Photo by A. Rooney)

Sabatini worked as a special-education teacher for years, returning to writing when her father passed away in 2005 as a way to “make sense of that experience.” She submitted her first novel to 32 agents before one took her as a client and sold the book to a division of Simon & Schuster.

When talking to students, Sabatini uses this as an example of perseverance and the necessity of editing and re-editing. She has said her favorite part of writing is when she realizes “unintended threads” have “woven themselves throughout the story…. My subconscious seems to know more about me than I can ever imagine.”