After trying to grow flowers and vegetables for years in a yard that’s surrounded by forest, I have learned a lot about the appetites of deer.

Like many forests, mine is barren of plants and tree seedlings except for the invasive plants deer won’t eat. Unless I put up a fence, that situation won’t change. The ecosystem has shifted and habitat for other wildlife, insects and birds is lost, as well. I could fill this entire column with environmental and health issues but the point here is, what can you plant in these conditions?

Where I live, pretty much everything in the yard has been nibbled except for the awful Japanese barberry and the forsythia. I’ve learned that “deer resistance” is relative to how hungry the deer are. “All bets are off when they’re starving,” says Jennifer Stengle, an educator with the Cornell Cooperative Extension Resource of Putnam County. 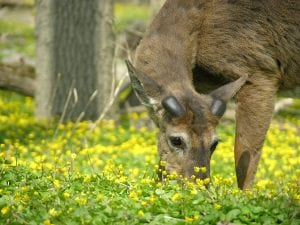 At a forum on March 26 hosted by the Hudson Highlands Land Trust, Stengle explained that deer are “adaptive generalists,” which means they can live almost anywhere and are not picky about their diet and shelter.

Some plants, shrubs and trees can withstand deer browsing better than others. Joe Pye weed, false indigo and bluestar are resilient and can recover. Two kinds of spirea — meadowsweet and steeple bush or hardhack — are generally left alone. Stengle recommends fragrant sumac and shrubby cinquefoil.

Elderberries are a good example of a plant that evolved to protect itself from hungry wildlife. All parts of it are poisonous — the leaves, bark and buds — but when it produces fruit, the berries can be eaten. This strategy lets it produce new bushes because animals spread the seeds in their feces.

Deer have been found to browse pretty much all native evergreens and dogwoods, so these “need to be protected until they can get established” and become deer resistant, Stengle says. 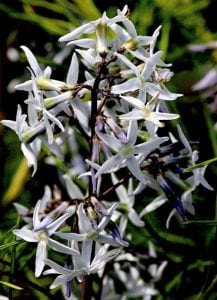 Bluestar will tolerate some deer browsing but is usually not bothered. (Wildflower.org)

All of these recommendations add value to the landscape beyond being deer tolerant. They feed pollinators or attract insects for birds or make shelter for other wildlife. We tend to rely on the same daffodils, forsythia and grasses that don’t have those qualities. By adding diversity and native plants, it’s possible to create a sustainable habitat that’s more than a pretty flowerbed.

I’ve heard of planting techniques to discourage deer that include surrounding deer favorites with deer-resistant plants. But Stengle says that doesn’t work. “The deer go right through to the plant they want,” she says.

The only defenses that research has shown to be effective are barriers and spray repellents based on putrescent egg solids known as “the stinky ones.” Stengle cautions against using herbal oil-based sprays because they can harm pollinators. “Oils don’t dry and they form a film over the insect,” she says. “If you spray plants that are blooming, you can kill the pollinators.” The stinky sprays haven’t been shown to do harm.

Want to grow vegetables? Spraying your tomatoes and lettuce with putrescent egg solids doesn’t improve the flavor, so you’ll need a fence. It needs to be about 6 feet high and buried 6 to 12 inches to keep out the woodchucks, rabbits and raccoons.