Scientists who study tick-borne diseases such as Lyme are sounding the alarm: There may be an explosion in the tick population this summer.

Richard Ostfeld, a disease ecologist at the Cary Institute of Ecosystem Studies in Millbrook, who has studied Lyme for 20 years, expects 2017 and 2018 to be particularly risky years for the disease.

His prediction is based on an interaction of acorns, mice, ticks and humans. 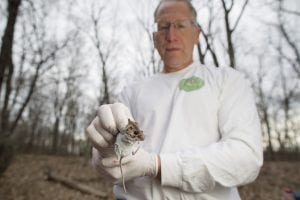 In 2015 the oak forests of the Hudson Valley produced a bumper crop of acorns, which typically occurs every two to five years. (Ostfeld has compared his 2015 research trips into the woods to walking on ball bearings.) The acorns, in turn, provided abundant food for mice, causing their population to boom. (The origins of the mouse plague, Ostfeld has explained, lies in the fact that the large forests of centuries ago have been fragmented by development, which has led to a decline in traditional mouse connoisseurs such as foxes, hawks and owls.)

When there are a lot of mice, there are a lot of ticks. After they hatch, tick nymphs attach their hind legs to grass or leaves and wave their forelegs. Very often they grasp onto a passing mouse and feed on its blood, which contains the bacterium that causes Lyme. A single mouse may have 50 to 100 ticks on its face and ears, and it usually infects about 95 percent of them, according to Ostfeld. Deer also help spread ticks around.

How to remove a tick

1. Grasp the tick as close to the skin as possible with fine-tipped tweezers. Don’t delay or wait for a tick to drop off; you usually have about 24 hours before a Lyme-infected tick passes on the bacterium.

2. Pull upward with steady, even pressure. Don’t twist or jerk the tick, which can cause the mouth-parts to break off and remain in the skin. If this happens, remove them with tweezers. If you are unable to remove them easily, let the skin heal.

3. After removing the tick, clean the bite area and your hands with rubbing alcohol, an iodine scrub or soap and water.

4. Dispose of a live tick by submersing it in alcohol, placing it in a sealed bag/container, wrapping it tightly in tape or flushing it down the toilet. Never crush a tick with your fingers.

While the Lyme bacterium does not harm ticks, they pass it along when they bite humans. And warmer winters due to climate change have helped ticks spread to places they have never before been seen, including west across the U.S. and in Europe and the forests of Asia. 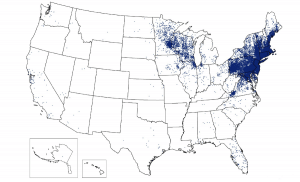 A CDC map of counties that had at least one report of Lyme disease in 2015. Click to enlarge.

Hudson Valley residents are well versed in the importance of daily “tick checks,” but that is not the case in areas where infected ticks are now showing up. As a result, the early flu-like symptoms of the disease are not recognized as Lyme and go untreated by antibiotics, leading to long-term health problems such as inflammation of the joints, spinal cord and brain. Ostfeld has called this development “the perfect storm” for Lyme, especially since there is no vaccine for humans.

Other common tick-borne diseases in the U.S. include:

Hikers, hunters and others who venture into the woods were traditionally considered most at risk, but public health officials now warn that cutting the lawn, gardening and other backyard activities should also prompt tick checks, especially since the nymphs can be as small as the period at the end of this sentence.

Ostfeld and his wife, Felicia Keesing, a professor of mathematics and computing at Bard College, are in the midst of a five-year study that includes research in Beacon to determine the safest and most effective ways for neighborhoods and municipalities to kill ticks.