I was surprised to learn from her letter to the editor in the March 31 issue that one member of the two-person crew who attended and recorded some Village Board meetings since the beginning of March, and who was present at all of the electoral events of the last few weeks, was mayoral candidate Alison Anthoine’s daughter (Filmmaker says thanks).

Before the start of the March 7 board meeting, the mayor and I and the other board members were approached by two women. One carried a video camera, and the other introduced herself as Elizabeth Dermont. She said they were professional media people in the city and wanted to make a short film about small-town elections. 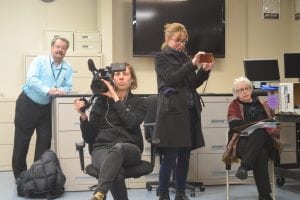 She suggested that they had, by luck, stumbled upon our quaint village’s election season, and asked us if they could film the meeting. She did not mention that her mother lived in Cold Spring and was running for mayor. Her mother was at the meeting and sat no more than 6 feet from her daughter and never once indicated through conversation or body language that they had ever met. Not suspecting we were being lied to, we held our meeting, and the mayor gave them a one-on-one interview afterward.

Now to learn this woman is Elizabeth Wolff, daughter of Anthoine, I am dumbfounded. What type of “journalist filmmaker” shows up to record her own mother’s “determined” campaign, an event that should have her boasting with pride and proclaiming her hopes for her mom’s ambition to make a difference in the world, but then gives the board a false name and pretends she and her mom don’t know each other?

I can only wonder what advantage they hoped to gain by duping the village into thinking they were just budding filmmakers trying to capture small-town America exercising its democratic duties. What was her motivation to lie in such a way?

To read Wolff’s letter, one would think she had been upfront about her connection to one of the candidates from the moment she arrived. The truth about her time spent in Cold Spring is not as she or Anthoine, in her campaign for mayor, would like to spin it. I feel her actions after the fact to paint a fairy-tale picture about the work she did here stands as a clear example of gaslighting.

If The Current was aware of this story and not reporting on it, I’m concerned about your concept of what qualifies as newsworthy.

Editor’s note: We were not aware that Wolff, who is married to Andrew Dermont, was Anthoine’s daughter until she revealed it during an off-the-record conversation on Election Day.