It’s a rainy Sunday in Beacon, and Matthew Chase, Benjamin Lybrand and Jaime Pivar are taping a segment for their weekly news show about the failed attempt to overhaul the Affordable Care Act. They’re prepping Speaker of the House Paul Ryan, who is lying on the floor with tire marks across his chest.

For the record: Paul Ryan is a weasel, and a puppet.

The trio’s show, Puppet World News, each week recaps political news with the antics of a meddlesome group of forest animals, including a beaver with an orange toupee, and the intrepid critter reporters who pursue them. The production is an offshoot of the group’s musical puppet show, Make The Forest Great Again, which premiered in Beacon in January. 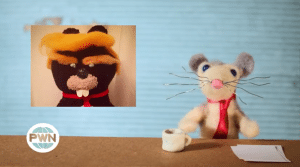 A Puppet World News report by anchor Felt Mouse on Beaver, the “so-called” leader of the forest, who has been accused of working with Russian bears

“We were joking around about the idea [of doing a weekly show], but then the immigration ban happened,” Chase says. “That led to the idea of a migration ban — banning birds from migrating and building a dam instead of a wall to keep them out. The news these days has been so absurd that it keeps working.”

“You’re looking for the humor in everything,” adds Pivar, “instead of the despair.”

The show, which can be viewed at youtube.com and soon at puppetworldnews.com, is useful for anyone who avoids watching the actual news to retain his or her sanity. The idea of a foreign government colluding with shadowy hackers to infiltrate political parties is easier to absorb if it’s a bear with a Russian accent and a group of geese calling themselves SqwakiLeaks monitoring the chicken coop.

Puppets have always been an effective tool for satire during political turmoil, noted Winifred Lambrecht, a lecturer at the Rhode Island School of Design, who will speak about “Activist Puppetry” at the Beacon Sloop Club at 7 p.m. on Thursday, April 13. “It’s portable and it can be done on a shoestring budget by a small group of people who can appear and disappear very quickly,” she explained. It’s also appealing to both young and old. 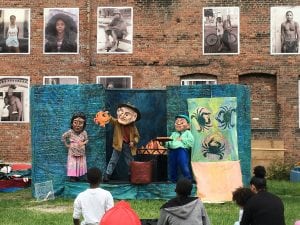 The talk will also feature Patrick Wadden, who founded the Arm of the Sea Theater, based in Saugerties, in 1982 with Marlena Marallo as an offshoot of Clearwater’s environmental education work. Last year in Beacon, they performed Hook, Line & Sinker, which told the story of generations of Hudson River fishermen and the dangers of PCB contamination.

Back at the Puppet News Network studio, the three producers must make judgment calls as to who gets a puppet. Chase spent 12 hours creating an Elizabeth Walnuts puppet because they believe Sen. Elizabeth Warren will continue to be in the news. But when it came time for an appearance by fired national security advisor Michael Flynn, “we just grabbed a stuffed crow from a Halloween store we had lying around and called it Michael Flying,” he said. “He was just in one shot. But who knows, maybe he’ll be back?”