In January 2014, a development firm came to the Philipstown Planning Board with a concept for a weekender community in North Highlands complete with million-dollar homes, a small lake and horse stables.

More than three years later, the project, called Hudson Highlands Reserve, has expanded from 136 to 206 acres and from 24 to 29 homes. The development would be marketed as a leisure community that its chief architect likened to the Hamptons.

But the questions from the Planning Board continue — including whether, despite being a “conservation subdivision,” Hudson Highlands Reserve would replicate typical suburbia and its encroachments. 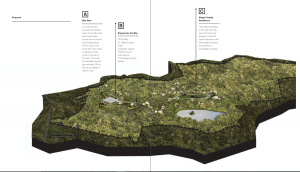 The board plans on April 9 to visit the property, located off Route 9 between East Mountain Road North and Horton Road to its south. It also borders Fahnestock State Park.

The site, which includes a former soil mining ground, is zoned rural residential and, in part, industrial-manufacturing, with aquifer, scenic protection and open-space conservation overlay (OSO) areas. Clove Creek runs through the property, which includes steep slopes and wetlands as well as the pond. It also contains the ruins of a mill, two old houses, stone walls and a barn built around 1815.

The proposal by Horton Road LLC, based in New York City, is the first conservation subdivision application under Philipstown’s 2011 zoning code update, which emphasizes preservation of the environment and the town’s rural character. The code says at least 60 percent of conservation subdivision property must be kept as open space, an amount that increases to 80 percent in an OSO. About 153 acres of the Hudson Highlands Reserve property are covered by an OSO. 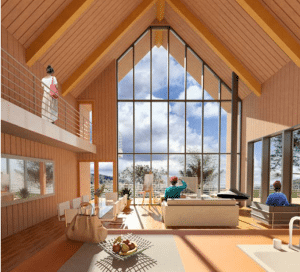 Designed to encourage “walkability” and a sense of neighborhood, a conservation subdivision concentrates buildings in one area, generally clustered in close proximity. That’s not the model used for Hudson Highlands Reserve, although the plan does confine development to about 40 acres of the property, with about 165 acres left open.

According to a plan dated March 1, the project groups the houses around a pond and looped road with the equestrian center nearby. Each home, priced at $1 million to $3 million and containing 3,000 to 4,000 square feet, would sit on a one-acre lot, and most would have their own, rather than a shared, driveway.

At its January and March meetings, Planning Board members questioned various aspects of the plans, including the spacing of the houses.

“This to me looks like suburban sprawl,” said then-board member Mary Ellen Finger in January. “Is there any way to incorporate a little more cluster housing?” She also pointed to the one-acre lots: “You can’t make them any smaller than that?”

“That would not be attractive to this project from a marketing point of view,” replied Glennon Watson, of Badey & Watson Surveying and Engineering, who is working with Horton Road LLC. “This is not going to be marketed to people who want a [smaller] lot.” Moreover, he said, clustered housing requires installation of a common water system. 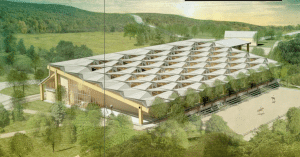 Anthony Merante, who chairs the Planning Board, asked if the housing could consist of two units per structure.

“There is no intent of having two houses under one roof,” replied Ulises Liceaga, the architect and principal developer for Horton Road LLC. “The intention is to have a weekend community. I hate to use this analogy, but it would be similar to what happens on the east end of Long Island.” He noted that, as weekenders, Hudson Highlands Reserve’s residents would not use the Haldane school system, the usual mail delivery or other local services and infrastructure.

When he initially approached the Planning Board in January 2014, Liceaga said he and his wife had purchased land on East Mountain Road North around 2000 and built a house where they lived on weekends with their five children. “Avid horseback riders, we looked for a place to have some horses” and began envisioning Hudson Highlands Reserve, he said. Horton Road LLC acquired the land in a series of transactions between May and December 2013. 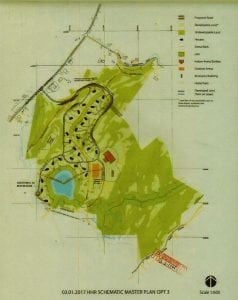 A map provided to the Philipstown Planning Board in March that depicts the planned Hudson Highlands Reserve development. (Click to enlarge)

Before appearing before the board in March 2017, Horton Road LLC moved the houses on their plan farther back from the pond, although Liceaga pointed to other ponds and small lakes in the Highlands where homes near the water apparently cause no problems. “Development close to a lake is not necessarily adverse to its health,” he argued, responding to concerns about run-off or other environmental risks.

Glennon Watson expressed frustration with the time it had taken the Planning Board to review the project. “We’ve been on this, in one fashion or another, for more than three years,” he said. “We haven’t gotten to the point where we really have anything [decided]. We need to move this along.”

The Planning Board’s engineer, Ron Gainer, responded that studies involving conservation and similar matters had only been finished recently, and Steve Gaba, the board attorney, said the time spent on detailed legwork would expedite the review going forward.