An early season match-up on April 10 between Beacon and Haldane gave a glimpse of the promise both teams show for the season.

Haldane came from behind in nine innings to edge the Bulldogs, 5-4, improving to 3-1. The game featured solid pitching, timely hitting and some great glove work.

The Blue Devils are a young, loose group. The team looks relaxed no matter the circumstances, and the girls enjoy each other’s company. Haldane fell last year in the sectional final to North Salem, and it’s been an adjustment for the team to play without five-year standout pitcher Marley Chefalo, who graduated, and senior third baseman Missy Lisikatos, who was injured during the basketball season and had knee surgery on April 11. 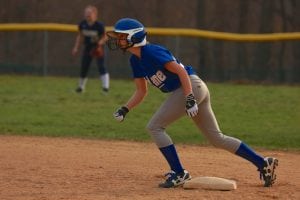 A Haldane runner keeps her eye on the plate. (Photo by Ross Corsair)

Seniors Morgan Hotaling and Hannah Monteleone will need to contribute at the plate and in the field.

Hotaling produced on April 10 with the game-tying single up the middle and Monteleone made several defensive gems. (See Athlete of the Week.) With Beacon up 4-2, she snared a line drive and doubled up a runner on third to keep the Bulldogs from breaking the game open.

Haldane freshmen also played key roles. Shianne Twoguns used a top-spin grip on her pitches to keep Beacon at bay and Livy Monteleone nailed a single to right over first base that plated two runs.

For Coach Nick Lisikatos, softball has been a family affair. He coached his daughter, Missy, and his two older daughters, Sam and Chelsea, also starred for Haldane. Chelsea Lisikatos, who played at UNC-Charlotte, now assists the Blue Devils and hopes to play for Greece in the 2020 Olympics. Sam is a senior at SUNY-Oneonta, where she has played softball and basketball. Both played softball for the Greek national team.

Nick Lisikatos huddles after every half inning. Coaching from third, he directs each batter: “Discipline. Foot down. Hands through the ball, 1-2-3… Get the barrel through. Hips, finish… Hands to the grass.”

In the Beacon dugout, Coach Brian Antalek is equally optimistic about his team. Beacon’s season ended last year with a playoff loss against Brewster, and after the loss to Haldane, they are 0-2. The Bulldogs only won six games last season, but the entire roster returns. 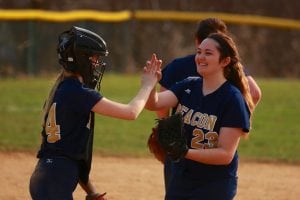 “I expect the team to be over .500 this season,” he said. “We are still young, but we gained valuable experience to build on from last season.” He said pitching and defense would be key. “We will pitch to contact, play solid defense behind them and make more plays than we don’t.”

The teams to beat in the league are Lourdes and Hendrick Hudson, he said, and in Section 1, Pearl River and Lakeland, which defeated Beacon, 21-0.

The Bulldogs are led by its captains, senior Sydney Dexter in centerfield, junior Savannah Mora at first base and junior Taryn Maloney at catcher. Sophomore pitcher Kameryn Haran also showed good command against Haldane and second baseman Jordan Acevedo has a reliable glove.