After a stormy 2016, sloop returns to river

These days you could walk right by the sloop Clearwater, the Hudson River’s second most famous ship currently docked on the Rondout Creek in Kingston, and not even notice it.

Located behind the Hudson River Maritime Museum, the sloop sits wrapped in plastic wrap, as if in a giant cocoon. Climbing aboard through an opening in the wrap reveals a dozen crew members performing the final round of winter maintenance before the 106-foot sloop begins its 2017 sailing season on Tuesday, April 18.

The mood is less hectic than it typically would be at this time of year. Since the sloop underwent a massive $850,000 restoration in 2016, there isn’t work to be done now except routine maintenance. 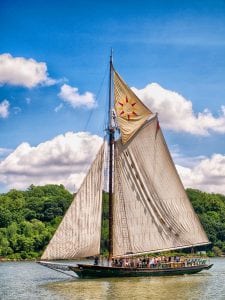 On the other hand, the air is charged with expectations. Last year was a tumultuous one for the Beacon-based nonprofit, which was conceived in 1966 by folk icon Pete Seeger to save the Hudson River. (The Clearwater launched in 1969.)

It began with Peter Gross, the executive director of Hudson River Sloop Clearwater, Inc., resigning after 18 months in the position. Clearwater’s annual Hudson River Revival music festival, a major source of revenue, was cancelled; the organization said it wanted to focus on the U.S. Coast Guard-ordered renovation of the sloop. That proved to be a massive financial burden and shortened the sailing season, further reducing income. There was talk amongst members of Clearwater’s board of directors of shutting down.

That was 2016. In 2017 the Clearwater will have a full sailing season, the Revival returns to Croton Point Park on June 17 and 18 with a roster of performers that includes Los Lobos, Richard Thompson and Josh Ritter, and the sloop itself is in better shape than ever.

“You know how it is in the early spring,” said Maija Niemisto, the group’s education director. “That February darkness begins to fade away and you realize that life is good again. We’re unfurling the sails after a rough patch.”

Niemisto credited the board and staff for having the courage to make tough decisions and also thanked the organization’s supporters. “We rely entirely on the goodwill of the Hudson Valley,” she said. “That’s what keeps the boat buoyant.”

A.J. St. Martin, the ship’s boatswain, echoed that sentiment. “I’ve lived on a lot of rivers and sailed on a lot of rivers, but the Clearwater community has withstood for twice my lifetime,” she said, while caulking new planks on the deck. “There’s so many people who care so much about this river. Not every river has that.” 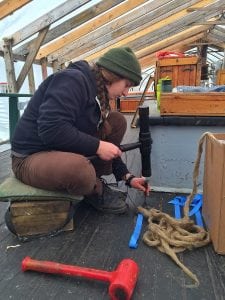 Boatswain A.J. St. Martin caulks the replacement planks aboard the Clearwater. (Photo by B. Cronin)

Caulking the Clearwater, a replica of the Dutch vessels that sailed the Hudson River in the 18th and 19th centuries, is an intricate process that involves layers of cotton, oakum (a natural, oily plant fiber) and pitch. It’s slow work, which can be a problem. “We’re an 18th-century vessel on a 21st-century schedule,” said St. Martin. “We can’t do everything the traditional way because then we’d have no time to do programming.”

As if on cue, a shop vac below deck roars to life.

The Dutch designed their sloops specifically for the Hudson. When settlers came to the Hudson Valley, the river reminded them of the waterways back home, only with larger hills and a wider river. So, they took their Old World designs and scaled them for the New World. While an ocean-going sloop has multiple, shorter masts to handle a variety of conditions, the Clearwater relies on a single, taller mast and two sails designed to catch the winds that come over the Highlands, the Palisades and the Catskills. 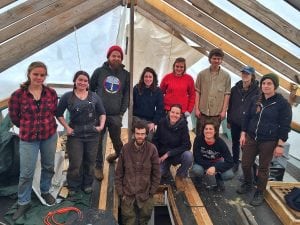 The crew of the Clearwater, ready to sail. (Photo by B. Cronin)

“It’s fun to sail a boat that’s designed for the exact place you’re sailing it in,” said Nick Rogers, one of the sloop’s two captains. (The other is Aleythea Dolstad.) “It wouldn’t do as well in any other body of water. It’s a big old heavy boat, but it sails well in light winds.”

The Clearwater’s first public sail will leave from Poughkeepsie on April 29. Others include a public sail from Cold Spring on May 6 and a Mother’s Day sail from Beacon on May 14. For the first few weeks of the season, the Clearwater will be booked with student groups, who use the ship as a floating classroom to learn about the river and how to protect it.

Besides allowing more people to experience the river, the full season has another advantage, Niemisto says. “There’s a lot more wind in the Valley in the spring than in the summer. Last year we missed all that exciting spring wind.”