Nikki Goth Itoi has lived in northern California for 20 years but each summer returns with her family to the Hudson Valley, where she grew up, to vacation and scout locations for her book Hudson Valley & The Catskills, part of the Moon Travel Guide series.

The guide, which covers a wide area — from Yonkers to Albany and west of the river as far as Delaware and Sullivan counties — was first published in 2005 and is now in its fourth edition. Each year, Goth Itoi adds, subtracts and alters its content in preparation for the next update. She does the on-site research during her summer rambles but admits it’s often hard to keep up with the changes.

“So many restaurants and hotels open and close each season,” says Goth Itoi, who grew up in LaGrange. But the fact-checking of details such as hours and prices is critical. Take the changes at Montgomery Place, an historic country estate and working farm in Annandale. Last year, Bard College bought it from Historic Hudson Valley and it is no longer open to the public. However, there is still a seasonal farm stand.

The Moon guide focuses less on nightlife and more on craggy peaks, greenery and farm-to-table restaurants. The guidebook, Goth Itoi says, “has evolved with my own interests.” Flipping the guide open randomly yields headlines such as “Five Places for a Summer Picnic” and “A Wave of Farm Distilleries” as well as coverage of skiing sites and campgrounds and the attractions of the Albany, Troy and Saratoga area.

Among her suggestions for day trippers to the Highlands, Goth Itoi recommends browsing the antique stores on Main Street in Cold Spring (although mention of the Cold Spring Antique Show needs an update), scones at the Foundry Café, the seafood at Riverview, the pâté and mussels at Le Bouchon, a trip to The Stadium to see its Heisman trophies and a visit by “shuttle” (trolley) to Boscobel. 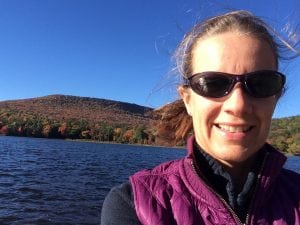 Elsewhere she notes that Beacon (along with Catskill, Hudson and Kingston) has reinvented itself and suggests visitors not miss Richard Serra’s Torqued Ellipses at Dia:Beacon, hike Mount Beacon and take a tour of the Madam Brett Homestead, among other activities.

To compile the first edition of a guide, Goth Itoi says, a writer must “hit all the key towns and pay attention and experience them.” (She has also written Moon guides to Baja and Los Cabos.) Then, on each subsequent trip, she says, “I get familiar again with a couple of places I haven’t been to for years and explore new ones. It’s very much an ‘Oh, I’ve never been to the farmers’ market in Callicoon’ [in Sullivan County] or suddenly becoming aware of a goat farm I didn’t know about.”

She adds that her goal is to provide a filter for active, independent travelers who want to “venture out and get pointed in a direction.”

In a post at her publisher’s site (moon.com), Goth Itoi writes that her own favorite Hudson Valley spots include “any riverside seat on the Metro-North train, the classic bowling alley/ice cream soda fountain at the Winter Clove Inn [in Round Top], and a particular lookout rock high up on the trail that leads to the 4,000-foot summit of Blackhead Mountain in the Catskills.”

Get out of town

In Hudson, venture beyond Olana and the stores on Warren Street to visit the Museum of Firefighting (fasnyfiremuseum.com). The Hudson Farmers Market (open 9 a.m. to 1 p.m. on Saturday from April 22 to Nov. 18 at Sixth and Columbia streets) is Columbia County’ largest (hudsonfarmersmarketny.com). Drive time: About 1 hour, 15 minutes.

At the Mohonk Preserve in New Paltz, there’s a challenging extended hike across the Mohonk Mountain House grounds to the Labyrinth rock through the Lemon Squeeze crevice. For a more family friendly adventure, another hike takes you past impressive boulders. All the trails there are amazing, says Goth Itoi, unless you suffer from vertigo. For hours and fees, see mohonkpreserve.org. Drive time: About 1 hour.

Combine a visit to the Clermont State Historic Site, in Columbia County, which appears much as it did in the early 20th century, with a meal at Gaskens along the tiny stretch of businesses in Germantown. The owners live upstairs (gaskinsny.com). Drive time: About 1 hour. 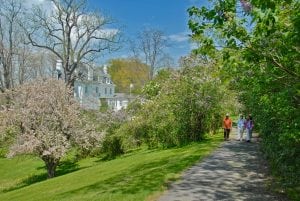 The lilac walk on the approach to Clermont State Historic Site, where the flowers bloom in late April or early May (NY Parks photo)

Hike Huckleberry Point near Tannersville, in Greene County. It shares a trailhead with a path to the top of Kaaterskill High Peak. The trail is rocky but in excellent condition with a moderate gradient and descent to Plattekill Creek. Resuming on the other side of a stream, there is a gradual ascent passing over some ledges. In June, this section of trail is bordered with mountain laurel. The descent leads to Huckleberry Point, where there are spectacular mountain and river views. Drive time: About 1 hour, 15 minutes.

Visit Millerton on Route 44 in northeastern Dutchess County. It was founded in 1851, when the New York & Harlem Railroad was built through the area. It’s the ending point for one of the stretches of the Harlem Valley Rail Trail for biking, running and walking through woods and orchards. There’s swimming and camping nearby at Rudd Pond, and access to Housatonic River, 10 minutes away, making it “a great base for a weekend getaway,” Goth Itoh says. The Millerton town center has boutiques, antique stores, Irving Farm Coffee Roasters (“great beans,” says Goth Itoi), the Harney & Sons tea shop, the retro Oakhurst Diner and The Moviehouse, a café and art gallery. Drive time: About 1 hour.