The Wee Play community group in Beacon will hold its 13th annual Ree-Play Sale from April 21 to 23, with a portion of the proceeds dedicated to the expansion of Memorial Park.

Wee Play is a volunteer group created in 2005 to support building a “tot lot” playground at Memorial Park. It has since expanded its focus to other parks and children’s initiatives in Beacon. In a survey conducted last year, Memorial Park users said they wanted the tot lot and a playground for older children expanded and integrated. 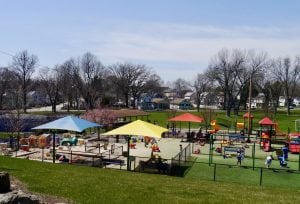 That led the group to partner with the city Recreation Department and Beacon landscape architect Bryan Quinn to create a master plan for the park, with Phase One scheduled for this summer.

“Wee Play knew it was time to take on several maintenance projects at the park, so we decided to review the whole site first so we could incorporate other potential renovations,” explained Raquel Moller Verdesi, chairperson of the Ree-Play Sale.

Mark Price, director of the Recreation Department, said the groups hope to add natural elements such as shade trees, as well as additional play and climbing structures.

Proceeds from the Ree-Play Sale also fund children’s programs at the Howland Public Library, which will honor Wee Play on April 29 with its annual Helen Savoit Award for Library Advocacy.