Museum show examines ‘you’ and ‘I’

The 38 works in Between I & Thou, a new long-term exhibit at the Hudson Valley Center for Creative Arts in Peekskill, each pose questions but invite you to consider before answering.

“We invited artists whose work we think sets up a dialogue with viewers,” explained Jo-Ann Brody of HVCCA. “This art invites you to make up a narrative story.” The exhibit’s name is a reference to philosopher Martin Buber’s 1923 book, I and Thou, in which he argued that the meaning of life lies in our relationships with others.

Between I & Thou contains works by many artists who are in their 60s to 80s. Several reflect the societal changes that have occurred over their lives. For example, Aminah Brenda Lynn Robinson’s paintings, with additions ranging from men’s ties to plastic garbage bags, depict the energy of the civil-rights movement, while Yardena Doing Youner’s photo installation, Class Reunion, highlights the individual and collective in her personal history. 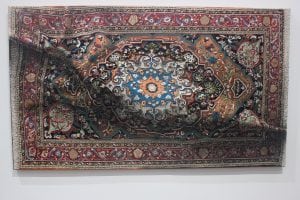 “Arcana,” a painting by Antonio Santin (photo by A. Rooney)

The works evoke commentary on nature, race, religion and women’s roles. Some, such as Antonio Santin’s Arcana, a painting of a shadowy, rumpled carpet with an object, possibly a body, underneath, conjure up mystery, while others, like Chris Jones’ collages, set the scene for letting one’s own imagination enter their spaces. “A single life is alone, with its own stories to tell,” he says.

Other works are moving, but for reasons not always apparent. Raquel Rabinovich’s River Library Scrolls — rolled tubes made from river mud and glue — reflect her “fascination with the concealed aspects of existence that we don’t see, or that seem to be invisible.” On a larger scale, Leonardo Drew’s installation, Number 43, draws from reclaimed materials found near his home in New York City, among them cotton mattress batting and wax-coated wood, which are oxidized and allowed to further decay. He sets them in a construction of wooden cubes, amassing them into a visually and emotionally compelling structure. 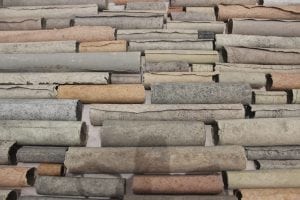 “River Library Scrolls,” by Raquel Rabinovich (photo by A. Rooney)

“What will happen if I put that texture with this form?” is the question Barbara Korman asks when conceiving of her “smaller than a forest, yet large enough to be slightly off-putting” installations, including Looking at the Woods, which consists of three painted wood branches. The branches of an elk are the focal point of Todd Murphy’s Samuel, which combines painting with photography in a powerful display of the grandeur and fragility of nature. In a different vein, Cal Lane’s sculptures, made largely from repurposed ammunition boxes, blend two of her former occupations: welder and beauty salon worker.

Accompanying Between I & Thou in the upstairs gallery is I’s Closed, I’s Opened: The Inner Self, an exhibit of photographs by Mark Berghash, the museum’s spring artist-in-residence. Each of a series of 10 facial close-ups, one with the subject’s eyes closed, is accompanied by a Haiku-like poem written by Berghash’s wife, Rachel, based on the subject’s expressed thoughts and feelings after the shoot.

Between I & Thou will be on display through December 2018. I’s Closed, I’s Opened runs through August 30.