After being sworn in, Nelsonville’s new mayor, Bill O’Neill, and trustee, Alan Potts, took their place with incumbent Trustee Thomas Robertson on the rostrum on April 17 for the Nelsonville village board’s monthly meeting and promptly took up the budget, consolidation and a scrap with Cold Spring over charges related to fire protection. 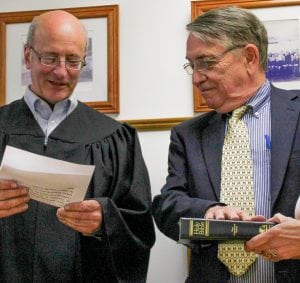 The board postponed its vote on the budget to allow time to resolve an argument with Cold Spring over whether Nelsonville’s payments for fire protection, provided by the Cold Spring Fire Company, should help cover higher pension and workers’ compensation costs.

The board scheduled a final budget workshop for 6:30 p.m. on Thursday, April 27. The state deadline for budget adoption is April 30.

In January, after being billed for $21,679 by Cold Spring, Nelsonville paid $20,675, about half of its annual fire protection budget allocation. It withheld the remaining $1,004, which Cold Spring said was for workers’ compensation costs and the Length of Service Award Program (LOSAP), a volunteer firefighter pension.

Tom Corless, then mayor, accused Cold Spring officials of trying to milk the fire company as a “cash cow” and said the increased pension and workers’ compensation expenses were Cold Spring’s burden.

Cold Spring Mayor Dave Merandy responded that Cold Spring had only passed along the proportional share of rising costs.

On April 17, Trustee Robertson said, “I don’t think it’s legal [for Cold Spring] to charge residents of another village who haven’t approved that measure.”

Potts held that it’s Cold Spring’s responsibility to fund LOSAP and workers’ compensation. “We just want to stop this,” he said, in part because it’s hard to do a budget with unexpected expenses.

O’Neill said Nelsonville must confer with Cold Spring “to understand the underlying basis of that bill, for what we’re being charged,” he said. “We’re going to do the right thing for ourselves and the fire department.” He also suggested a follow-up meeting with residents.

“Cold Spring and Nelsonville never get along, so we may as well forget it,” a woman in the audience called out.

For its part, Philipstown, which also pays Cold Spring for fire protection of some areas, agreed to send the village $60,060, which included a 3 percent increase in workers’ compensation costs and a 35 percent increase for LOSAP.

O’Neill said he understands Albany’s push for smaller municipalities in the state to consolidate services, “for a lot of good reasons.” He expressed willingness “to start a conversation with” Cold Spring and Philipstown about it. Nelsonville has a relatively small budget and consolidation might boost its taxes, he cautioned. “We’ll keep an open mind, but we want to do what’s best for our community,” he said.

Robertson said while he is “firmly opposed” to consolidation, he supported discussing it. Potts noted that while Nelsonville can’t be compelled to consolidate services, the state has the power to cut funding to municipalities that don’t.

The mayor announced he had contacted West Point to seek assistance in gauging the costs of installing sewer lines in Nelsonville. Although the village has pipes connecting to the Cold Spring tap-water system, most properties rely on septic systems.

O’Neill said the lack of sewers creates problems for businesses and real estate transactions. He described sewer installation as “a massive undertaking” but said, “It’s something we need to take a look at.”

The board gave conditional approval to a plan by Lyn Berkley to install temporary educational signs along the woodland trail that connects Nelsonville and the Haldane school campus.

Praising Beacon’s revitalization and emergence as an artistic center, O’Neill suggested Nelsonville pursue a comparable renaissance. “We need to get young people here, more diverse groups” involved in civic life, he said. When you ask people from elsewhere about Nelsonville, he said, they often mention its darker history when the Ku Klux Klan had a presence in town, he said. “Come on – this is a wonderful community,” he said. “And we need to leverage that and get some activism going on here. That’s what I would like to see and why I ran for mayor.”