Drawing bipartisan praise and a warm welcome from conservationists, New York State’s $153.1 billion fiscal 2018 budget boosts funding for education and environmental protection and deals with opioid abuse, tourism, economic development, consolidation and dozens of other issues important to the Highlands.

Based on the draft delivered in January by Gov. Andrew Cuomo, a Democrat, the budget won legislative approval April 9. It consists of $98.1 billion in operating funds and $55 billion from the federal government and other sources, mixes policy initiatives with spending and meets the state’s annual 2 percent cap on spending increases. The fiscal year began April 1.

However, the budget is not writ in stone. Cuomo’s office warned of “looming threats from Washington,” where the administration of President Donald Trump has proposed deep cuts in aid to states. Should federal aid drop by $850 million or more, the state budget director must prepare for cuts that will be implemented automatically unless the legislature enacts another plan within 90 days.

The state budget boosts school spending by about 4 percent, to approximately $25.8 billion, including $700 million additional in foundation aid, which goes to all public schools but focuses on those with growing enrollments or that teach a relatively large number of disabled or impoverished students.

The budget also launches a free-tuition program at state universities for students from families with annual incomes of less than $125,000.

Sandy Galef, a Democrat whose Assembly district includes Philipstown, said her chamber insisted on more education funding and prevailed. “That was really a big step forward,” she said.

She also observed that the budget provides $95.6 million to libraries for operations and $24 million for capital projects — a total increase of $10 million. 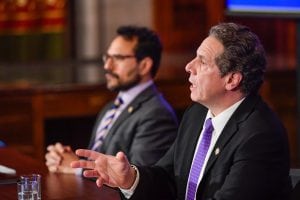 Gov. Andrew Cuomo announced April 7 that the legislature and executive branches had come to an agreement on the state budget. Budget Director Robert Mujica is in the background. (Governor’s Office photo)

The budget funds the Water Infrastructure Act, which established a $2.5 billion program to support clean-water projects such as wastewater treatment facilities and drinking water systems. It also funds the acquisition of land with fresh water and the investigation and correction of water pollution.

Paul Gallay, president of the environmental group Riverkeeper, said the billions to be spent on water infrastructure “will solve a host of pollution problems emanating from aging water treatment plants, leaking septic systems, old landfills, lead in water supply lines, overburdened storm-water systems and the state’s expanding dairy farm industry” and that funding acquisition of open space to protect clean water “will help assure that in the coming years we’ll do far more to keep pollutants out of our water supplies to begin with.”

In a related line item, the budget increases from 50 percent to 75 percent the amount of state matching money for municipalities that establish Local Waterfront Revitalization Programs. Cold Spring has been working on an LWRP, while Beacon adopted its plan in 1991.

The budget also provides $300 million to the Environmental Protection Fund, including $19 million to mitigate the effects of climate change.

The state park system got $120 million in capital funding, $30 million more than the 2017 fiscal year, to pay for infrastructure improvements and other needs.

Randy Simons, a spokesperson for the state parks, said parks staff was excited about the funding and already compiling a list of improvements for specific parks. He said the list would likely be released by early May and that “once we organize our projects, design and work will start immediately on many.”

The state Department of Environmental Conservation will receive $70 million for capital projects, including those that focus on dam safety and flood control.

The budget also provides $200 million to complete the Hudson River Valley Greenway and Erie Canal trails and to develop a 750-mile Manhattan-to-Canada Empire State Trail for hiking and bicycling.

The budget continues Gov. Cuomo’s push for local consolidation and includes a mandate that each county outside New York City, led by its county executive, draft a plan for governments to share services.

To develop the plan, the county executive must convene a panel consisting of the top elected official from each city, town and village. School districts could also be invited to participate. The plan would be presented at three public hearings and by Aug. 1 be submitted to the county legislature for recommendations; the county executive could incorporate these at his or her discretion.

The shared-services panel would then vote on the plan. However, before the vote, each panelist could excise anything that would adversely affect his or her municipality.

The New York Conference of Mayors praised the legislature for demonstrating “they actually understand local government and the vast amount of long-standing shared services” already in place.

The budget invests more than $200 million in prevention, treatment and recovery programs, and public education to fight heroin and opioid addiction and other substance abuse.

The budget provides $70 million for the “I Love New York” tourism campaign and $750 million to Regional Economic Development Councils. Beacon and Philipstown have both received REDC money in the past.

As part of its lobbying to expand outside of New York City, Uber launched a marketing campaign to persuade riders and legislators. (Uber image)

The budget also authorizes ride-sharing businesses such as Uber and Lyft to operate in the state outside of New York City as early as July. Frank Skartados, a Democrat whose district in the Assembly includes Beacon, praised the move, saying that with Metro-North train service augmented by Uber and Lyft cars, the area could more easily connect city residents and tourists “with our historic downtowns, world-class parks, outstanding restaurants and wineries.” Local residents who don’t have cars will also benefit, he said.

Serino said in a statement that “while no budget is perfect,” she was happy with the final document. Galef agreed it was a “good budget,” but expressed concern about potential losses of federal funding for Medicaid, education, environmental protection and arts-cultural programs. “I have to hope the federal government doesn’t do damage to what our budget says,” she said.

Select categories from the 2017-18 budget. Health and education spending account for 59 percent of $158 billion in costs. Source: openbudget.ny.gov.