After a report in our April 7 issue, Lyme Bomb, described the link between the population of mice in the Hudson Valley and the increased threat of Lyme disease, Michael Turton followed up with Richard Ostfeld, a disease ecologist at the Cary Institute of Ecosystem Studies in Millbrook.

Deer are often portrayed as the culprit when it comes to Lyme, but are mice the bigger problem?

Deer are important as a host for the adult stage of the blacklegged tick, but deer don’t infect the ticks with the Lyme disease bacterium. White-footed mice are the most efficient host for transmitting Lyme infection to the ticks. This is why the abundance of mice is so important in determining how many ticks get infected.

A few other animals, including chipmunks and shrews, transmit infection to ticks, but less so than mice. We have found the abundance of tick nymphs — the stage responsible for the great majority of cases of tick-borne diseases — is much more closely tied to the abundance of rodents than it is to deer.

A mouse can carry as many as 100 ticks on its face and ears. Why do ticks gravitate to that part of the mouse?

We suspect it’s because the ears and around the eyes and mouth have less fur so ticks have easier access to the skin. It’s also possible ticks try to feed on other parts of the mouse but are likely groomed off. 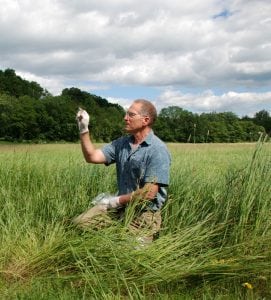 Is there any data on the number of mice in the Hudson Valley?

The numbers can vary from fewer than 5 per acre to more than 300 per acre. In the summer of 2016 we saw the biggest population in the 25 years we have kept records.

Federal mapping shows the spread of Lyme disease beyond its origins in New England and Wisconsin. What is fueling that expansion?

There is some evidence that climate warming is spreading Lyme disease to the north and away from the coast into what might have previously been too cold a climate. But the spread to the south isn’t a function of climate change. There are multiple factors at play but these aren’t well evaluated.

Hikers and hunters are cautioned to check for ticks. Who else needs to be aware of the threat of Lyme disease?

Anyone who goes outside in the Hudson Valley should check themselves vigilantly and use repellents and treated clothing that kills ticks. Mice are pretty much everywhere; they occupy any habitat from pristine forest to wetland to trashy overgrown woodlot, to sheds, basements and kitchens. They go places deer won’t go.

Dogs and horses are vulnerable, cats less so. Any tick that’s already attached to a pet isn’t of immediate concern to the pet owner because they stay attached for several days to a week and won’t feed again for months to a year. But if a tick is still crawling around on the dog or cat, it could crawl off and find a human host instead.

It was surprising to hear you say during an interview with NPR that the patchwork landscape of the Hudson Valley created by settlement, deforestation, agriculture, etc., is great for mice. Wouldn’t open fields, meadows and lawns make them more vulnerable to predators?

The opposite is true. The main predators — owls, hawks, foxes, weasels and bobcats — are more abundant and effective in larger, less disturbed forested areas. The population of mice is greater in small forest patches embedded in a non-forest matrix.