The Philipstown Reform Synagogue will mark Holocaust Remembrance Day on Saturday, April 29, by showing the documentary Paper Clips at the Desmond-Fish Library in Garrison. The screening, which begins at 1 p.m., will be followed by a discussion with Henry Stern, a Holocaust survivor who lives in Philipstown. 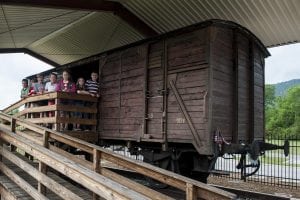 Students at Whitwell Middle School in Tennessee, the subject of the documentary Paper Clips, created a Children’s Holocaust Memorial on school grounds inside a car once used to transport Jewish prisoners.

The 2004 film follows middle-school teachers in Tennessee who created a Holocaust education class. Their students embraced the idea of paper clips worn by Norwegians as a symbol of resistance and collected 11 million of them, one for each victim of the Holocaust, for a permanent display inside a rail car in the school courtyard.