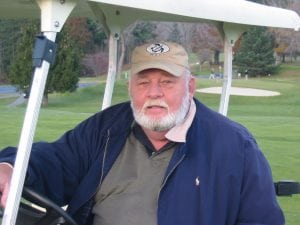 Richard (Richie) Walter Browne, 73, died April 2, 2017, at his home in Sausalito, California. Browne was the golf superintendent at the Garrison Golf Course for 30 years until his retirement in 2005.

Born May 24, 1943, he was the son of Capt. Walter R. and Katherine Browne. He grew up at the U.S. Military Academy at West Point, attended the Manlius Military School and graduated from Highland Falls High School.

An accomplished golfer, he earned a degree in golf agronomy from the University of Massachusetts and became a well-respected pro. An all-around sportsman, he also played hockey and football, hunted and fished and had a love for horse racing. In addition, he loved cooking, entertaining and dancing, enjoyed his Guinness with a shot of Green Spot and suffered through many years as a Jets fan.

Incredibly proud of his Irish heritage, he treated everyone like family and was affectionately known as “Pops.” He had a generous heart, a contagious laugh and when he smiled his face lit up the room. Richard had a zest and love for life that shall remain unparalleled. He was a man who led from his heart and was a gentle giant in every sense of the word, bringing laughter, kindness and love to all he knew.

Upon semi-retiring to Sausalito, Richard decided to become a cab driver and in four years, never missed a call. He became a friend and confidant and well too often the guardian for the unencumbered. He and his wife Miriam became members of the Sausalito Yacht Club in 2006 and served on its entertainment committee.

Memorial donations may be made to Hospice by the Bay (hospicebythebay.org) or the Sausalito Fire Department (smfd.org).

Eric Paul Keegan, 49, of East Hartford, Connecticut, died April 17, 2017. Among his survivors is a brother, Jeffrey Keegan, of Cold Spring.

A wizard with all things technical, Eric studied computer technology at the University of Connecticut and worked for many years as an enterprise computing consultant.

Memorial donations may be made to the college fund of Elizabeth Keegan. Please make checks payable to Connecticut Higher Education Trust (CHET), 6 Lafayette Ave., East Hartford, CT 06118, with her name in the memo.

One thought on “Philipstown Obituaries”