On the banks of the Hudson

Ages ago as a student in Beacon High School, I had to read the poem Thanatopsis, by William Cullen Bryant. How much more palatable that homework assignment would have been had we known that Bryant once walked the streets of Beacon and wrote one of his poems here. 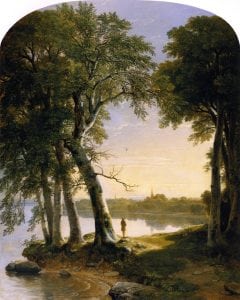 Bryant (1794-1878) was a frequent sojourner in our community, spending several summers in a boarding house while visiting his wealthy friends. In 1827, while waiting for the ferry at Fishkill Landing, he wrote A Scene on the Banks of the Hudson (“Cool shades and dews are round my way, / And silence of the early day; / Mid the dark rocks that watch his bed, / Glitters the mighty Hudson spread …”). In 1850 Asher Durand transposed Bryant’s ferry poem into a painting but changed the setting to Cold Spring.

“The air was filled with them; their undulation was like the long waves of the ocean in a calm, and the fluttering of their wings made a noise like the crackling of fire among dry leaves.”

So wrote Philip Hone in his diary on Nov. 4, 1835, after viewing a sight no one shall ever see again — massive flights of wild passenger pigeons darkening the skies over Beacon. 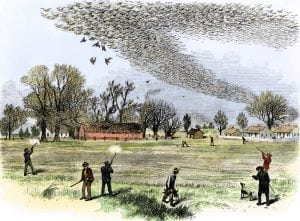 A drawing shows farmers shooting at a flock of passenger pigeons in northern Louisiana in 1875.

Hone, who had been a one-term mayor of New York City in 1826, and an investor and director of the Matteawan Company (located about where the One East Main Street building is today), was in Beacon (then called Matteawan) to view his cotton-cloth factory and to check the account books. Hone wrote:

“The mighty army came from the west, and crossing the valley where I was, passed the top of the mountains. Every man and boy in the Matteawans who could get a gun, and was willing to lose part of a day’s work in the factory, sallied out on murder bent; pigeon pie became an unexpected dish on many a table.”

Flocks of the passenger pigeon were still seen in Dutchess County as late as 1875 but most naturalists agree that by 1898 they were extinct throughout the state.

“Good reason to buy a new refrigerator” was the line for a Central Hudson advertisement in 1938 that featured a Davis Street mother, Betty Morse, and her three children: Priscilla, 2, and twins Billy and Betty, 1. It was part of a campaign to promote the utility’s Meter-Ice Plan in which a customer could replace an ice box with an electric refrigerator for only two nickels a day! 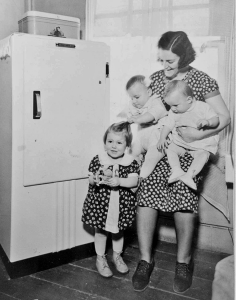 Betty Morse with twins Billy and Betty and two-year-old Priscilla in 1938. (Photo via BHS courtesy of Ralph Morse)

The plan worked like this: you picked out a refrigerator from any appliance dealer (the Morse family had a Westinghouse from A.C. Smith & Co. on Main Street) and a meter box was installed in which you placed two nickels each day to pay it off. Typically, the appliances cost $100 to $150, so you would be dropping nickels daily for three or four years.

What happened if you forgot, or were a nickel short? The power was cut off and you were left with a glorified ice box.

Phebe Van Vlack Doughty, born in 1873 in Matteawan, became the first female doctor based in southern Dutchess County after she earned her medical degree from the University of Michigan in 1904. Her father, Major John Henry Doughty, had been a surgeon during the Civil War and later was chief surgeon at Highland Hospital.

As a girl, Phebe witnessed a number of medical emergencies when people were brought to the family’s home on Schenck Avenue. “I remember one man was bitten by a mad dog,” she recalled. “Father sucked the wound. We were all frightened, but he took care of himself and was all right. The man recovered, too.” 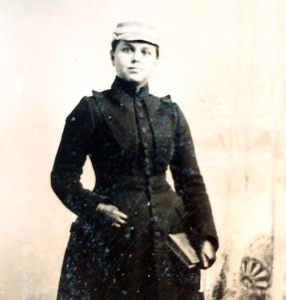 Phebe Van Vlack Doughty when she graduated from Vassar in 1895

Phebe wanted to become a teacher and graduated from Vassar in 1895. But after her brother Thomas, who began to practice with their father in 1896, died suddenly at age 33, she decided to join the family practice, which she did in November 1904. We can imagine her dismay when her father died unexpectedly in January 1905.

“A woman physician was a brand new thing then,” she recalled in 1957. “I began making calls with Debbie, a little brown horse, and a runabout. I had sunny disposition, a pretty good practice, and a pretty good time. In the flu epidemic of 1918, I had more than 100 patients and lost only two — a baby and one old person.”

Dr. Doughty kept her practice in Beacon until 1926, when she retired after being injured in a car crash. She died in 1967 at age 93.