Foundry owner: ‘You can’t make this stuff up’

Maybe Jeff Consaga hasn’t seen it all, but he must be close. From the woman who carried her dog in her bra to the customer who had him leave a sandwich daily in the middle of Main Street, the owner of The Foundry Café in Cold Spring has tales to tell.

Consaga began working at the café in 1990 when it was known as Karen’s Kitchen. In 1996 he took over the business and changed its name. Customers are known to drive long distances to wait patiently for his French toast and weekend pancakes. For regulars, the Foundry Café continues to be a place where everyone knows their names, and where, on certain days, if you know the password, morning coffee can be had before the doors open.

But Consaga, in his 28 years at 55 Main, has also encountered customers whose behavior has ranged from hilarious to outrageous to frightening. I pulled him away from the counter on a rainy Monday afternoon and took notes.

At one time, a faded sign that read “Unattended children will be sold” hung behind the cash register. “We’re not a daycare,” Consaga explains.

One afternoon, a couple lunching with their children called Jeff out of the kitchen.

“We don’t like that sign,” the father said. “Children are a blessing from God, meant to be enjoyed.” Consaga agreed, pointing out that he has two daughters. Nevertheless, the mother sat on the hallway floor with her older child and a large stroller, blocking customers from reaching the coffee bar and restroom. “It was a protest, a sit-in,” Consaga says.

The situation became heated after the man stuck his finger in Consaga’s face, then picked up one of his children and held her between the two of them.

“Go ahead and hit me, tough guy,” the man sneered. Instead, Consaga called the police. As the family left, the father promised to return with his attorney, but the departure caused the other patrons to burst into applause.

The sign was later destroyed by water damage and replaced with one that reads: 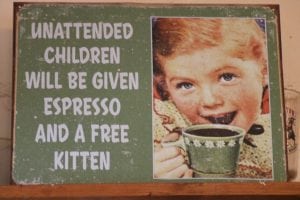 A woman who traveled extensively on business was known to insist upon paying her bills in foreign currency. Once, after a trip to Russia, she plopped a stack of rubles on the counter.

“All you have to do is take it to the bank and exchange it,” she said.

“That might work at an airport or in Manhattan,” Consaga replied, “but certainly not here in Cold Spring.”

She persisted, saying she had no use for the rubles in the States.

Consaga also pointed out that while the pile of bills looked impressive, it was not nearly enough to cover her check. (Each ruble was worth about a penny.) The woman returned later to pay her bill with U.S. dollars but left the tip in rubles.

One morning a group of hikers ordered 20 sandwiches to go. All was well until a woman in the group challenged Consago about his cookies. “Why do you make them so big?,” she said. “You’re contributing to obesity and diabetes.” 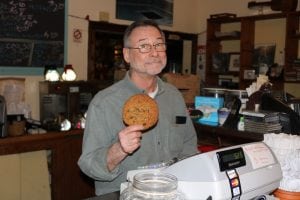 One customer was critical of the size of Consaga’s cookies, which she said contributed to diabetes and obesity. He suggested she share it. (Photo by M. Turton)

Taken aback, Consaga suggested they were made to share. But the discussion became an argument, and when the woman returned from the restroom Consaga watched her take handfuls of straws and plastic cutlery from the counter, items already included in each lunch bag. He also noticed rolls of toilet paper and paper towels in her backpack.

Furious, Consaga confronted her. “Who do you think you are?” he asked. The woman replied: “We’re hikers. We take what we need.”

Consaga went outside to speak with the other hikers. “I’m sorry, but your friend blew it,” he told them, and canceled the order.

Consaga once discovered an elderly customer had gone missing at the same time a line began to grow at the restroom. After banging loudly on the locked door for several minutes, he ripped it open.

There was the man, sound asleep on the toilet. He had been napping for almost an hour.

After a Garrison regular became impatient waiting in line for his breakfast order, Consaga says he began calling in advance. That worked fine, until the customer had a better idea.

“I’m really running late,” he told Consaga on the phone one morning. “Can you make my bacon-egg-and-cheese and my coffee with a little milk and two sugars and put it out on the yellow line on Main Street in a bag? I’ll pay you at the end of the week.” 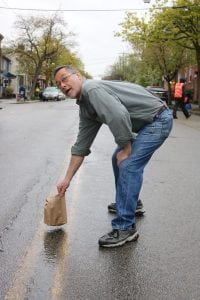 Jeff Consaga recreates his one-time ritual for a customer who insisted on having his breakfast placed in the middle of Main Street for pickup. (Photo by M. Turton)

Consaga isn’t sure why he agreed, but he did. Minutes later, the customer drove down Main Street, slowed his car to a crawl, opened the door and scooped up his still-hot breakfast.

This became a bizarre ritual until the first time the breakfast was run over by another car and the customer demanded a replacement. With that, and the promise of weekly payment that turned into months and hundreds of dollars, the Foundry’s flirtation with a drive-through lane came to a halt.

A party of four ordered vegetarian chili but almost immediately protested it contained beef. “Back then I used texturized vegetable protein,” Consaga recalls, because the soy product picks up the chili flavors, has the texture of meat and is delicious.

“There’s beef in this chili!” they insisted.

With that the group got up and left without paying. Consaga suggested it might be prudent for them not to return.

One couple, impressed with the antique brass fixtures, asked to purchase them for their home. Consaga politely declined. A week later, he says, the woman, who Consaga refers to as “the long, cool woman in a black dress,” returned and stole the brass knob from the restroom door.

Other pilfered items have included numerous CDs; a set of 24 Cordon Bleu porcelain cream pitchers; a complete set of flower vases, including the flowers; honey-bear honey dispensers; outdoor chairs; brownie trays and salt and pepper shakers. Not to mention the toilet paper and paper towels.

“It’s not locals or regulars,” Consaga says. “It’s day-trippers and people passing through.”

The cafe has seen its share of unusual, non-human visitors.

“There was a 6-foot boa constrictor, a baby chimp, squirrel monkeys, guinea pigs and several varieties of birds,” Consaga says. “Oh, and a tiny dog a woman had stuffed inside her bra.

“You really can’t make this stuff up,” he says.