Is your French a bit rusty? Has Je parle un peu drifted toward Je ne parle pas? Jacqueline Coumans is ready to save the day.

An interior designer and native French speaker who divides her time between Manhattan and her new home in Kent, Coumans is launching a series of salon language classes in Garrison on April 28, and each Friday evening afterward. Drop-ins are welcome. 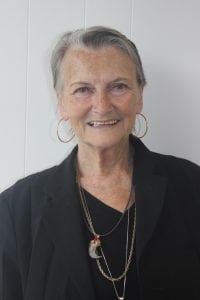 Jacqueline Coumans (Photo by A. Rooney)

The classes take place at Munder-Skiles, the high-end garden furniture design firm on Route 9D. For 25 years, Coumans owned Le Décor Français at 72nd and Lexington, which specialized in, bien sûr, decoration in the French tradition. Her designs, which often mixed fabric and antiques with surprising elements, have long been a staple of interior design magazines.

Though busy running the business and raising her sons (one of whom, Hadrien, lives in Cold Spring, and runs a design business with his wife, Pamela, and his mother), Coumans always fondly recalled her first jobs teaching French. A few years ago, she decided she wanted to share her love of the language and the culture.

“I sent out 50 letters to 50 clients, describing what I had in mind,” she says. “Ten signed up, seven stayed and three are still there. I saw what they liked the most, which is conversation. So, if they are all near the same level, we begin with talking and move on to reading. For example, in my city class we are reading a wonderful writer, Romain Gary. I find the two fields [interior design and teaching] complementary — it’s all French, anyway!”

Coumans hasn’t lived in France for quite some time. Her husband’s business took them first to Brazil, then in 1983 to New York. Lured to the Highlands by her grandchildren (all boys — her other son lives in Boston), she arrived two summers ago and lives deep in the woods, returning to her Upper East Side apartment each week, still with a hand in the business.

Although, her classes are most definitely serious, she tells students that “the acquisition of a French sensibilité is equally important” as learning vocabulary. Her students memorize the fables of LaFontaine, verses that are familiar to French schoolchildren, and classes may include recipes and comic sketches.

It was Coumans’ friend John Danzer, the owner of Munder-Stiles, who suggested she hold the weekly class after hours at its Route 9D showroom. They typically last about 90 minutes, although wine and cheese are served so there may be no telling. Coumans plans on guest speakers, perhaps a writer or chef. There is only one hard, fast rule: no politics. “Forget it,” she says. “We have too much literature to read.”

*French is spoken here. But you knew that.