Despite pleas on Facebook and elsewhere, Fahnestock State Park has not found enough lifeguards to staff Canopus Beach for the summer. As a result, Evan Thompson, an assistant state parks manager based in Fahnestock, is looking for a few good men and women (six, to be exact) who can:

Canopus Beach, which is located at 1498 Route 301 in Carmel, is open to the public for swimming between Memorial Day (May 29) and Labor Day (Sept. 4), initially on Saturdays and Sundays, and then daily starting the third week of June. The park’s lifeguards double as kayak/ paddling boat rescuers and general providers of first aid. They earn $13.50 to $16 an hour. 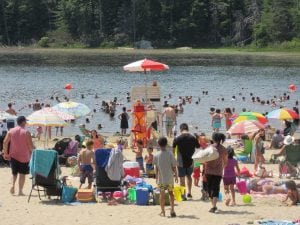 In 2016 a lifeguard shortage forced Thompson to close Canopus Beach two days a week. To keep it open at all, he had to scramble to bring in lifeguards from other state parks.

Academic schedules exacerbate the problem. Thompson said many lifeguards are college students who must return to campus by mid-August, leaving a gap of about three weeks before the season ends. He pointed out, however, that older adults can be lifeguards as long as they meet the requirements, which are being in good physical shape, holding certifications in lifeguarding, CPR and first aid, and completing tests required by the New York State Office of Parks, Recreation and Historic Preservation, including the challenges listed on Page 1.

“It’s become more difficult for the last four or five years,” says Ajello, who has been recruiting lifeguards for the outdoor pool for 15 years.

What has changed? “Some parents don’t want their kids to work during the summer, or to do routine side jobs such as emptying garbage bins. Or some kids will tell me they will only work for $20 an hour and a 40-hour week for July and August but that we’ll also need to accommodate their vacations and internships,” she says, with a laugh. “You also have situations where the student doesn’t have a car, and both parents work, so I will tell an applicant to find someone else to apply who they can carpool with.”

To keep the pool open throughout the season, she looks for high school students, along with college students who attend schools that start after Labor Day, and pays a competitive wage of $12 to $14 an hour. But while she might start the season with 12 lifeguards after much work to recruit them, she could end up with four. “I love summer, but between Memorial and Labor days I don’t sleep much,” she said.

Applicants must be certified as lifeguards and in CPR. Email [email protected].

“It’s a great summer job, but there’s a lot of responsibility that goes with it because you’re keeping people safe,” Thompson said. He noted, however, that Canopus Beach is a “relatively quiet park. It’s not a high-stress job. We don’t have a lot of serious incidents.” While state park lifeguards rescue about 4,000 swimmers annually, Thompson said Canopus lifeguards typically make only one or two “saves” each summer when a swimmer is foundering or temporarily incapacitated.

Instead, much of their work involves basic tasks, including enforcing beach rules, the most unpopular of which may be getting everyone out of the water when a thunderstorm is approaching, Thompson said.

Besides spending the summer outdoors, lifeguarding is a good way to learn about how to work with people, he said.

Thompson said he has one lifeguard returning and a candidate training for the park service tests. A third prospect has yet to begin the process. For information, see parks.ny.gov or email [email protected]

One thought on “Warning: No Lifeguards”