Thank you for all of the information about the spread of Lyme and its connection to ticks and white-footed mice (Lyme Bomb, April 7; Lyme Bomb 2, April 14).

What was not addressed was how to deal with this proliferation of the mice and other small rodents. Humans have contributed to these excessive numbers, as we have with deer. In the last couple hundred years we have eliminated all of their predators and created the perfect edge habitat for them, first with farms that became suburbs filled with shrubs and plants that, to deer, are like salad bars.

According to an expert who spoke at the deer symposium organized in March by the Hudson Highlands Land Trust, the deer population has jumped from 10 to 12 animals per square mile in pre-colonial times to the current 50 to 100 per square mile in areas around metropolitan New York. This jump in the number of deer, coupled with the introduction of invasive plant species such as barberry, is destroying the understory in our woods. 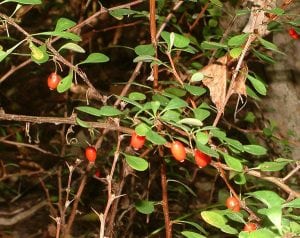 The fruit, leaves and thorns of Japanese barberry (Audubon photo)

For many years, before it became illegal in New York to purchase Japanese barberry, it was the “go-to” plant that many people planted in their yards and gardens because it looked nice and deer left it alone. Unfortunately, the thorny shrub also provides wonderful cover for mice from coyotes and hawks. Look out your car window and a great percentage of green plant material visible in the first days of warm weather is barberry. Studies have shown that a barberry-infested forest has 120 ticks per acre versus 10 ticks per acre without it.

To eliminate the devastation that we have created, our job is to dig up and replace barberry with native shrubs on our properties, or at least cut it back (along with other invasive plants) before it goes to seed in the fall.  Be safe along roadsides and get permission from owners, but do the same wherever you see barberry. Then the predators can do their job to reduce the white-footed mice population.