They are sculptures, the work of Swiss-born artist Heinrich Spillmann, who during the week is project director for the Brooklyn Public Library. But for more than a year, when the weather cooperates on the weekend, he has been heading north to work on his art.

“I’ve done little stone sculptures all my life, but this is new,” he explains. 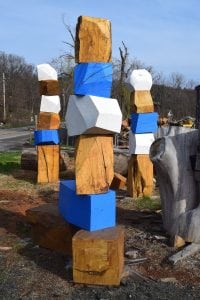 Blocks are painted to preserve the wood. (Photo by Michael Turton)

Spillmann, 63, was an art student in Switzerland before coming to New York in 1978 to attend the Cooper Union. Except for seven years in Germany in the 1990s, he has lived in the U.S. since. “I’ve spent most of my working life in design and architecture,” he says. He also has some background in structural engineering, which is coming in handy on his Philipstown project.

He was inspired to create the columns after Hurricanes Irene and Sandy felled a number of large trees in Brooklyn’s Green-Wood Cemetery, providing the artist with “great volumes” of wood. Initially he worked in a friend’s yard on East Mountain Road.

Spillmann has the trees trimmed into logs as large as 45 inches in diameter. The blocks he cuts from them can weigh thousands of pounds. 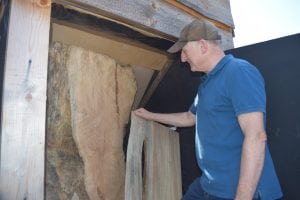 Spillmann uses a solar-powered kiln to dry wood for his sculptures. (Photo by Michael Turton)

“That one is probably close to 4,000 pounds,” he says, pointing to a particularly massive piece. Using a chainsaw, he transforms the rough cuts into shapes, then uses a grinder for detail and to smooth the surface. Spillmann works alone, using a hoist.

Before cutting the wood, Spillmann works with models on his dining-room table. “I document the model with photos and blow them up to scale,” he says. “You can’t just wing it — one wrong cut can be very bad.”

The logs, which include a variety of hardwoods, are difficult to work with, he says, but “softer woods rot and erode more quickly. The elm was pretty good.”

Still, even the hardest of woods break down when exposed to the elements, so he applies paint. “The issue is preserving the wood,” he says. “I had a huge trunk that was left as natural wood collapse within four years.” 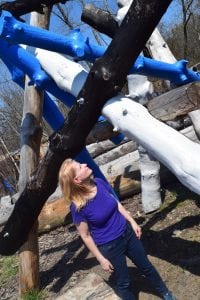 Spillmann says his colors are not an artistic statement. “There was nothing conscious about the colors,” he says. “But I realized after the fact that they are kind of architectural colors — architectural blue and white generally used for houses.”  The black, he said, is from burning the wood. “I’m more about three dimensions than color. I’m a sculptor, not a painter.”

His project has no name, although Spillmann alternately refers to his work in conversation as “totems” or “columns.” He hopes to sell the pieces as an outdoor collection, “keeping them as a family.” 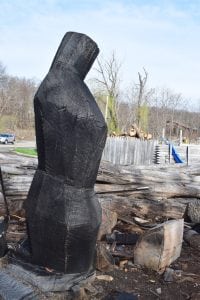 Burning creates a blackened surface on some of the sculptures. (Photo by Michael Turton)

Curious drivers often stop. “I recently talked to a guy who couldn’t understand why I wasn’t cutting the wood in the shape of diamonds,” Spillmann says.  “He sketched out all 32 basic shapes of diamond cutting on a slab and gave me this whole lecture.” Spillmann wasn’t irritated. “It’s great having people stop by.”

He admits to occasional moments of doubt. “Often when you’re physically tired, you just don’t know anymore,” he says. “You sit in the car, everything hurts, and you ask yourself, ‘What the hell am I doing?’ But then the next time you come up here it’s like, ‘OK, this is what it is. It’s really cool.’ ”

Even after he returns to Brooklyn, the project is never set aside. “I think about it pretty much every day,” he says.

One thought on “What Is That Guy Doing?”